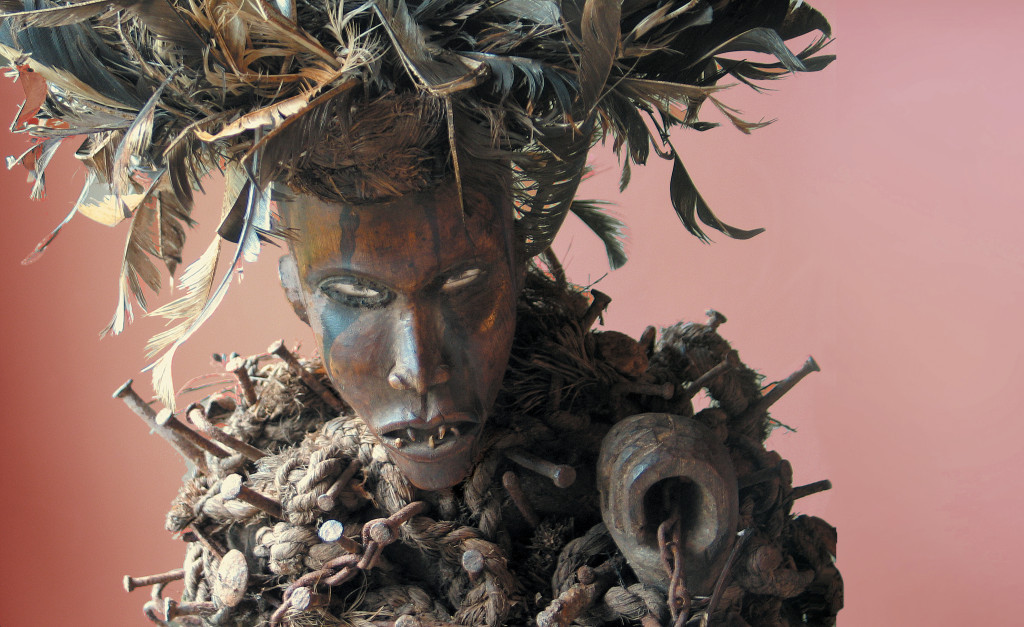 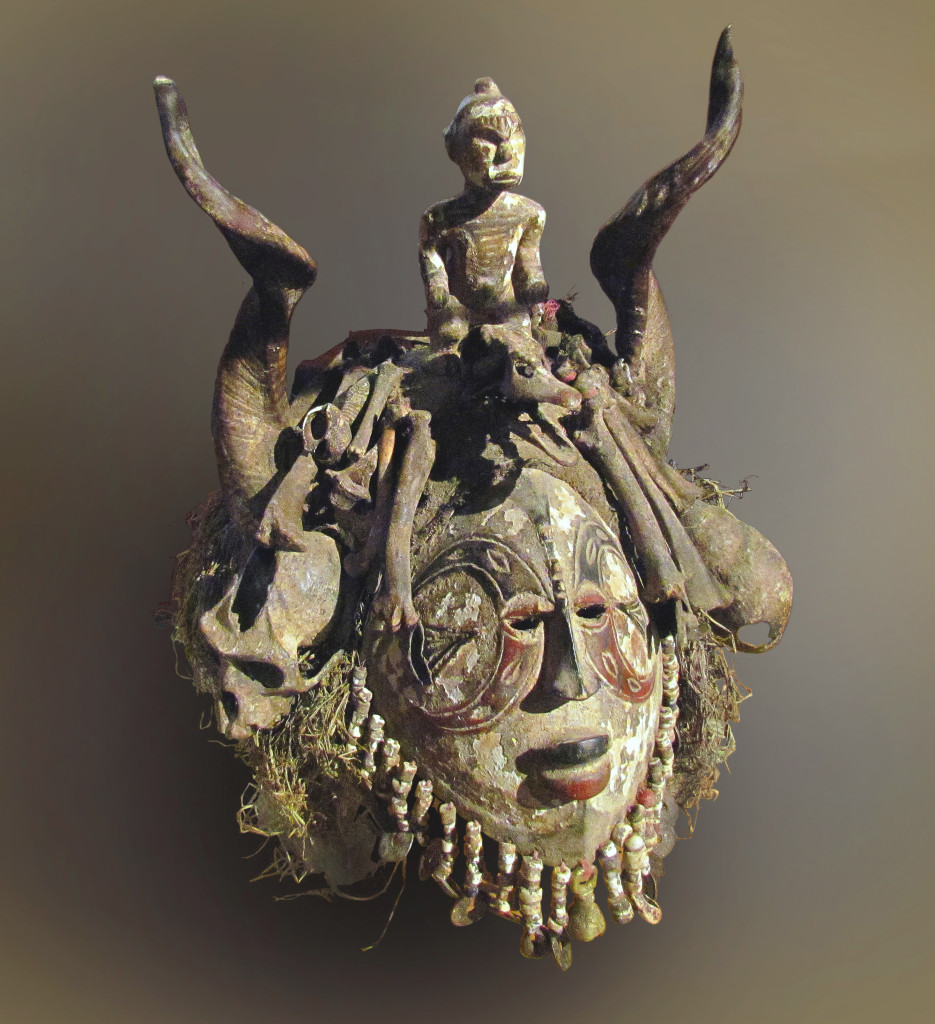 Mask from the Igbo people, Nigeria. 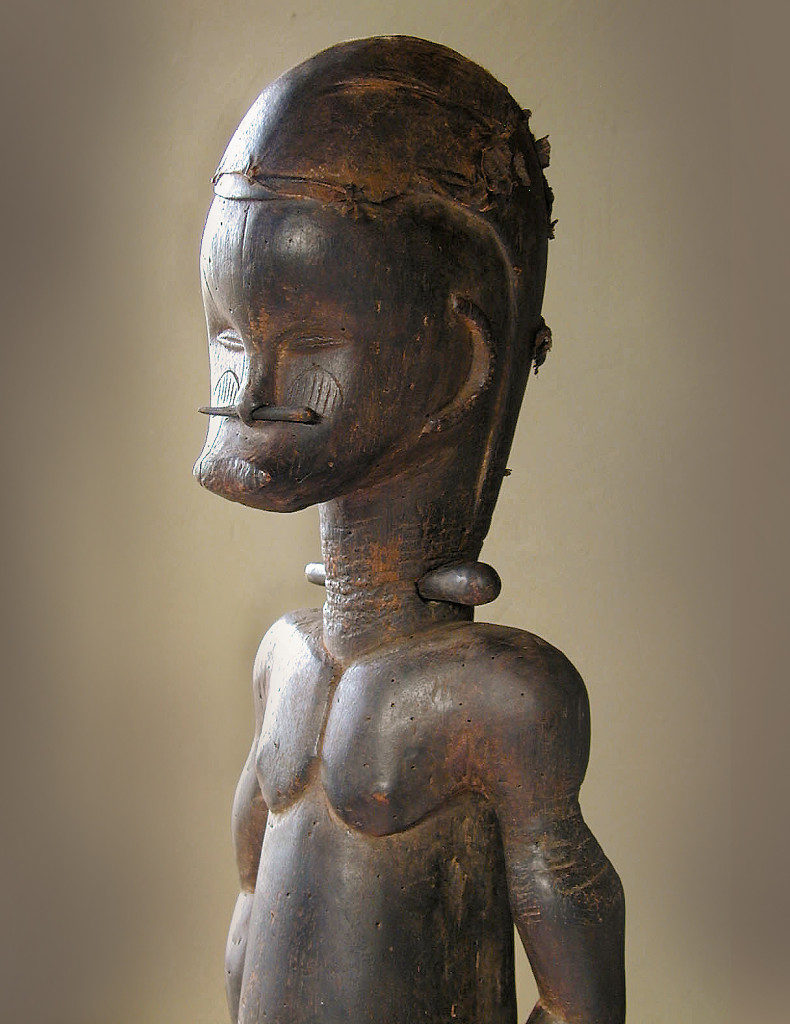 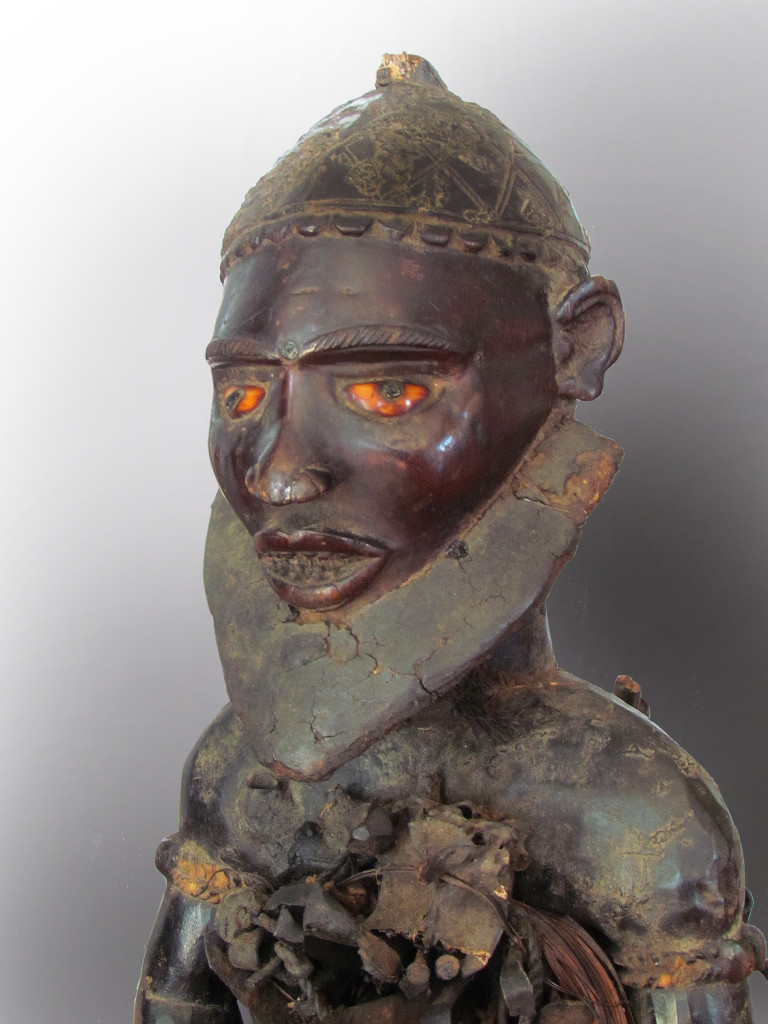 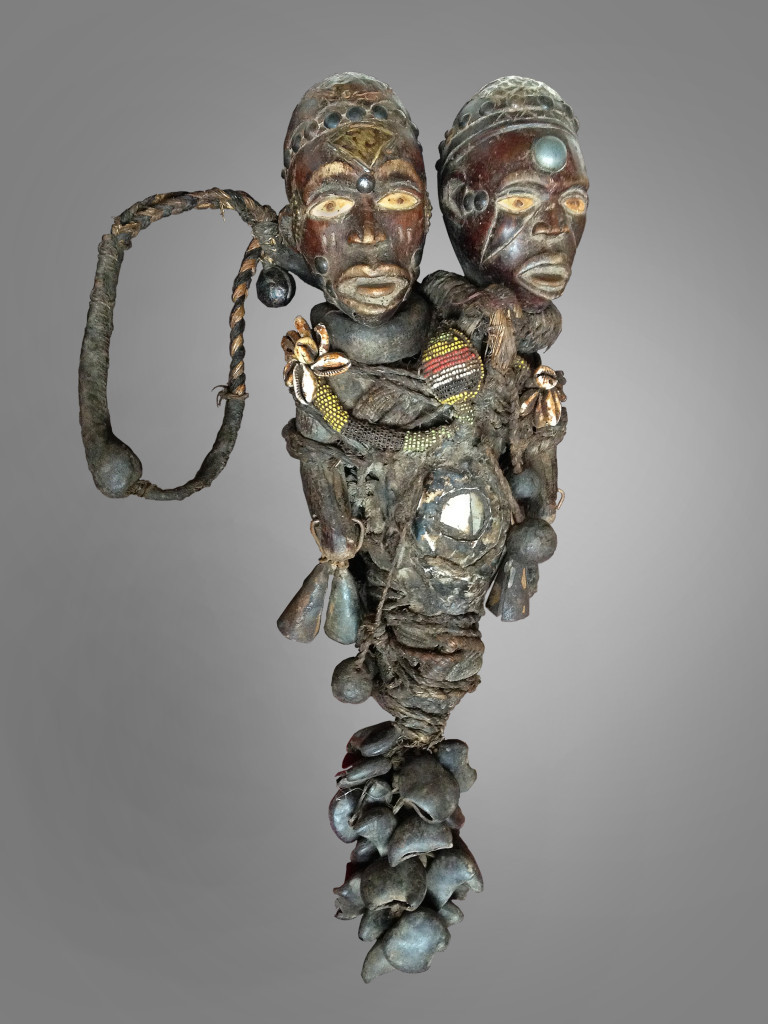 Double minkisi. The ventral “mirror” enables the nganga (priest) to detect the presence of witches. 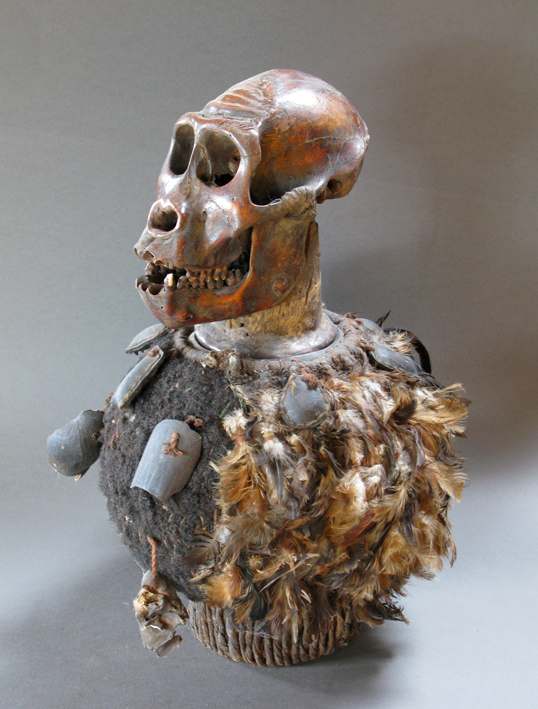 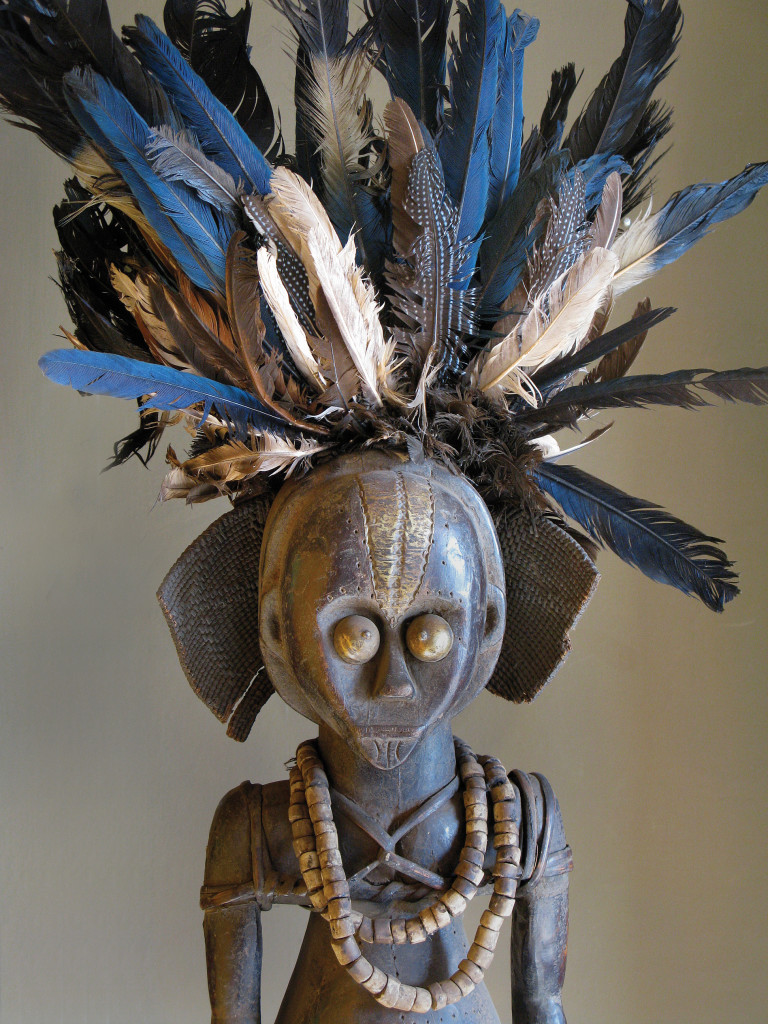 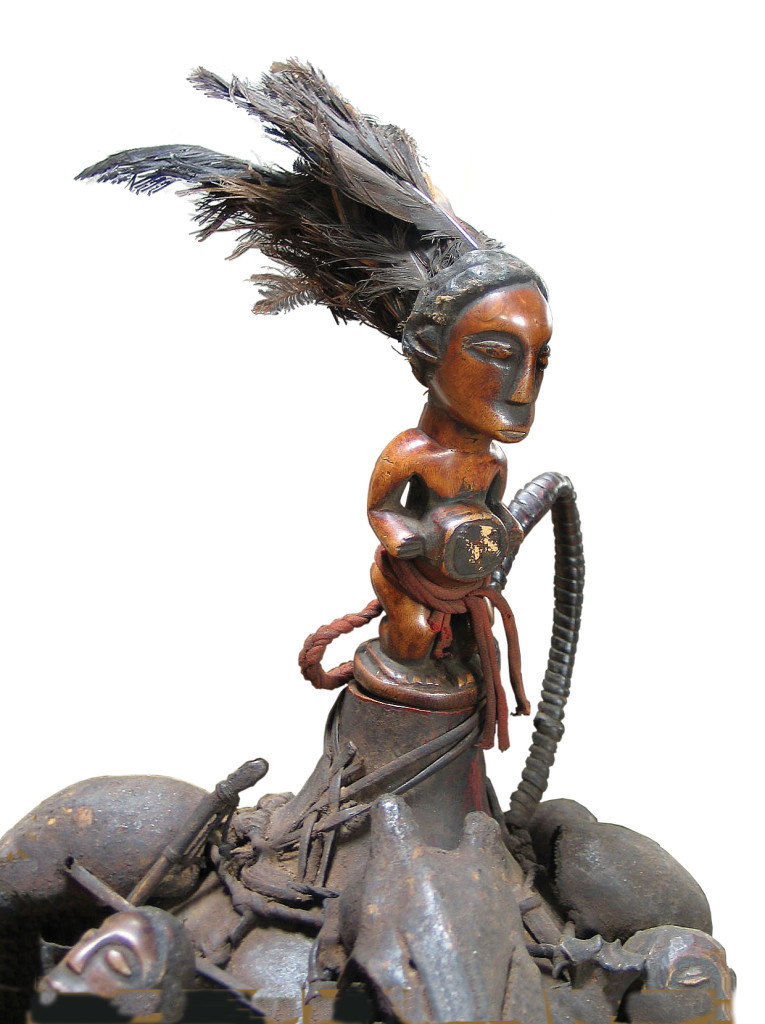 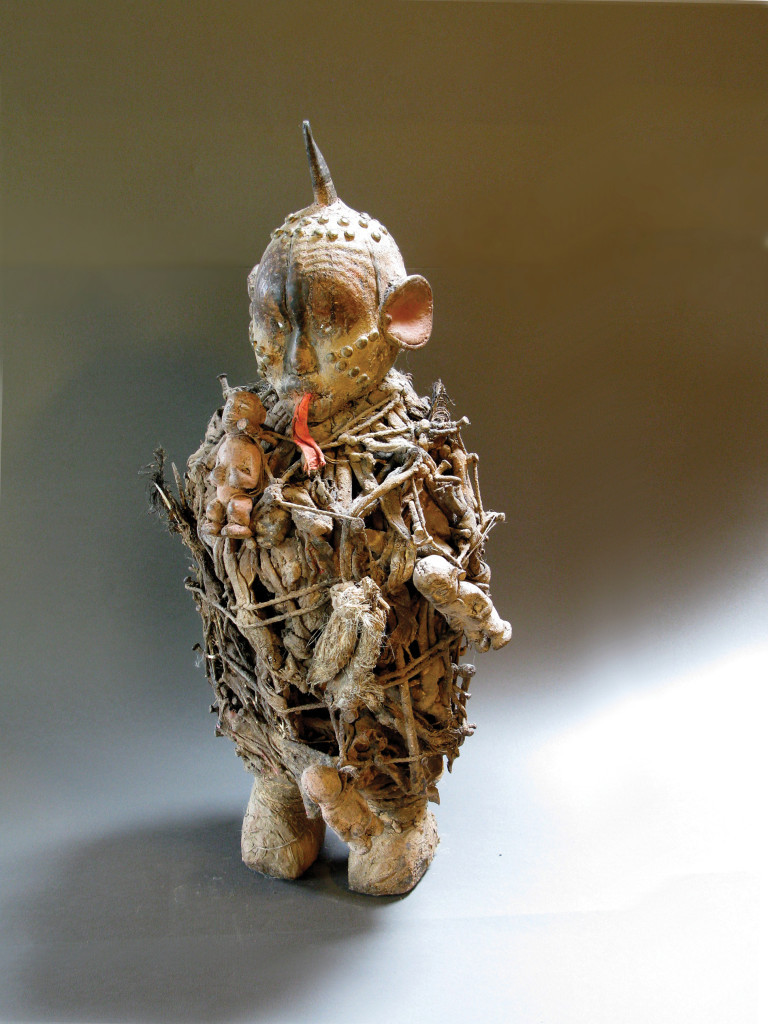 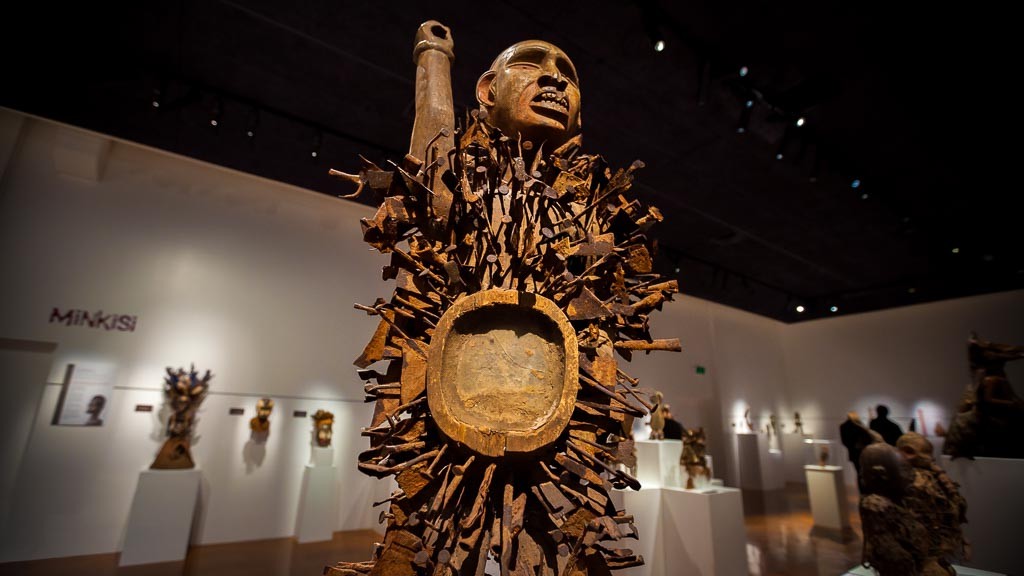 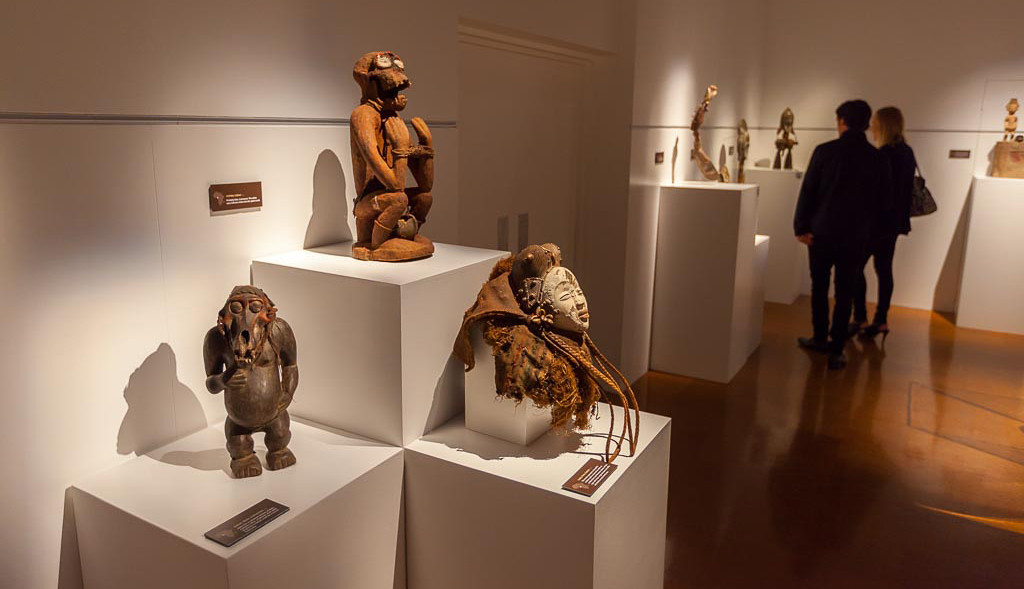 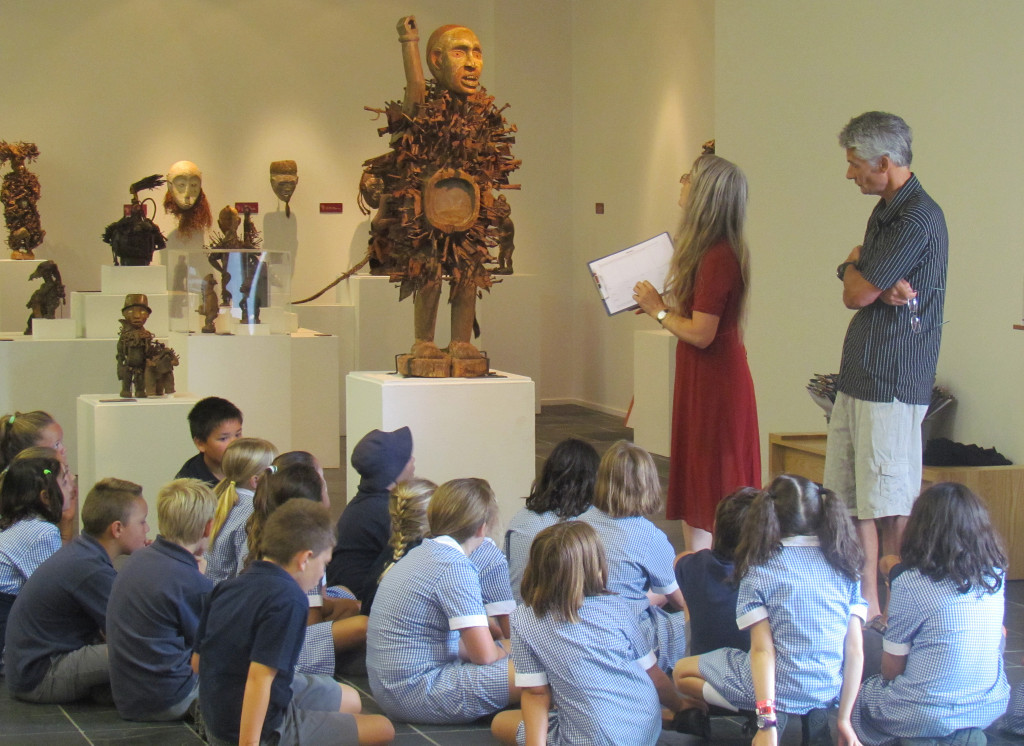 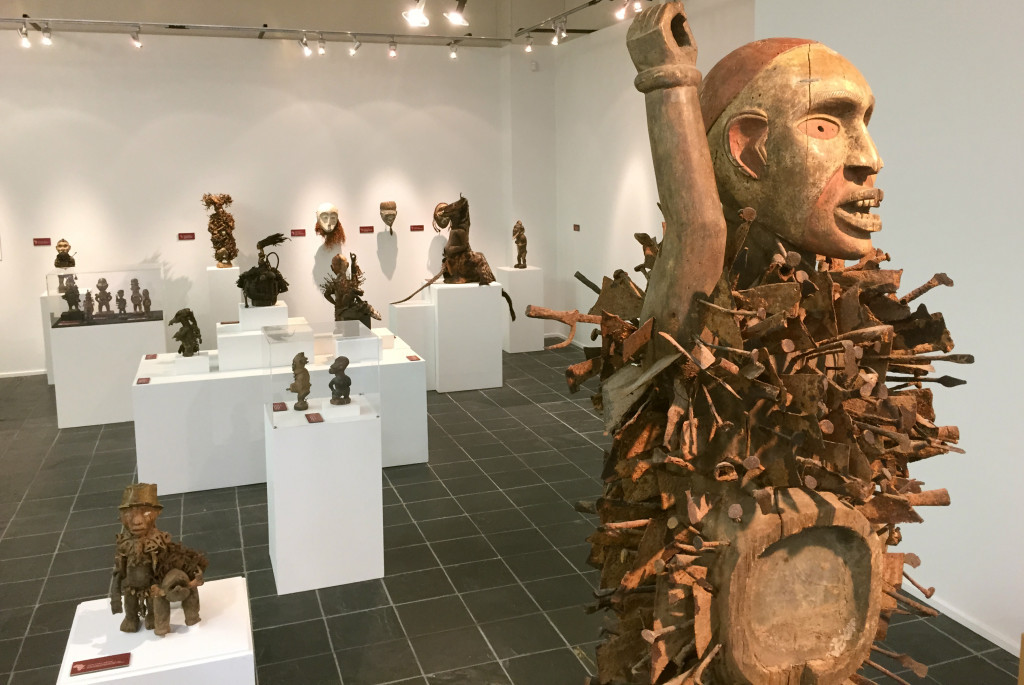 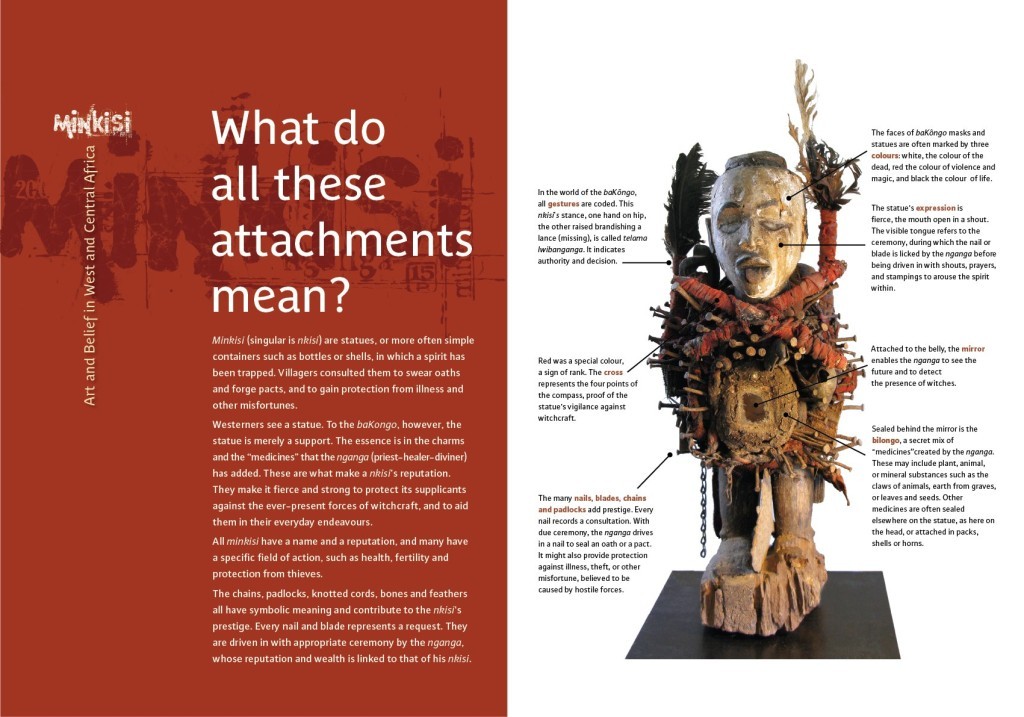 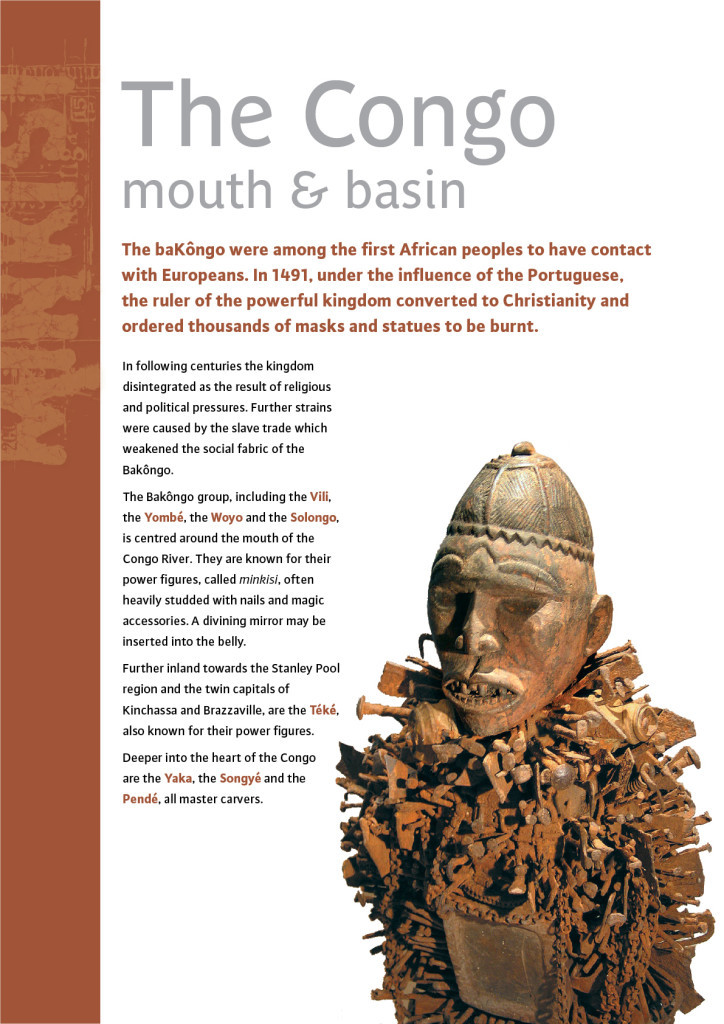 One of three regional wall panels 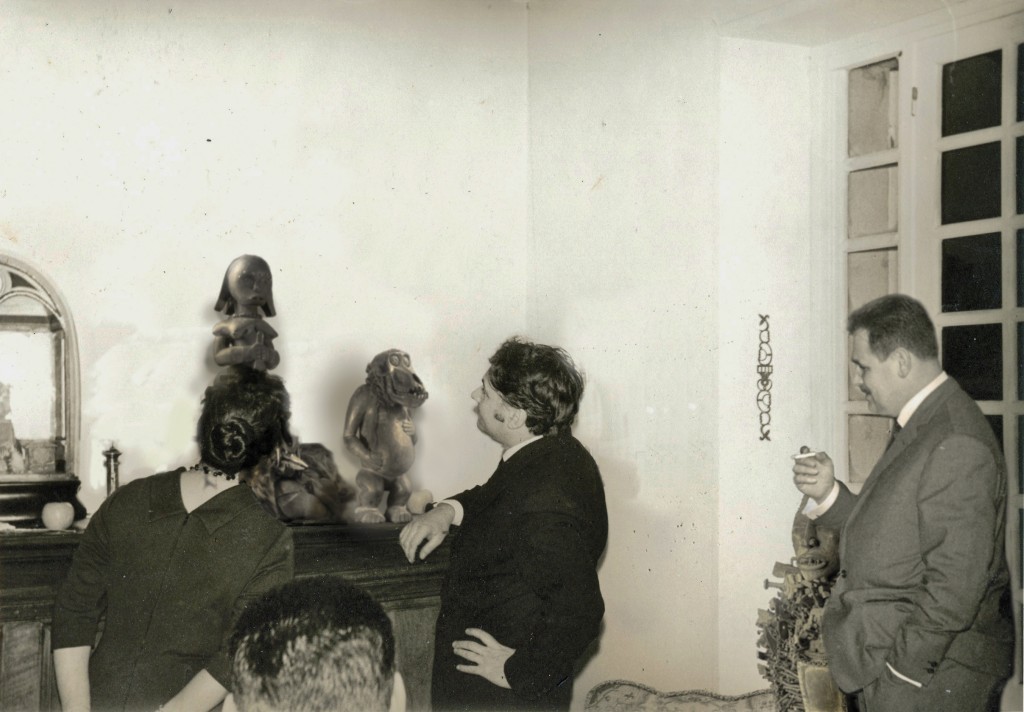 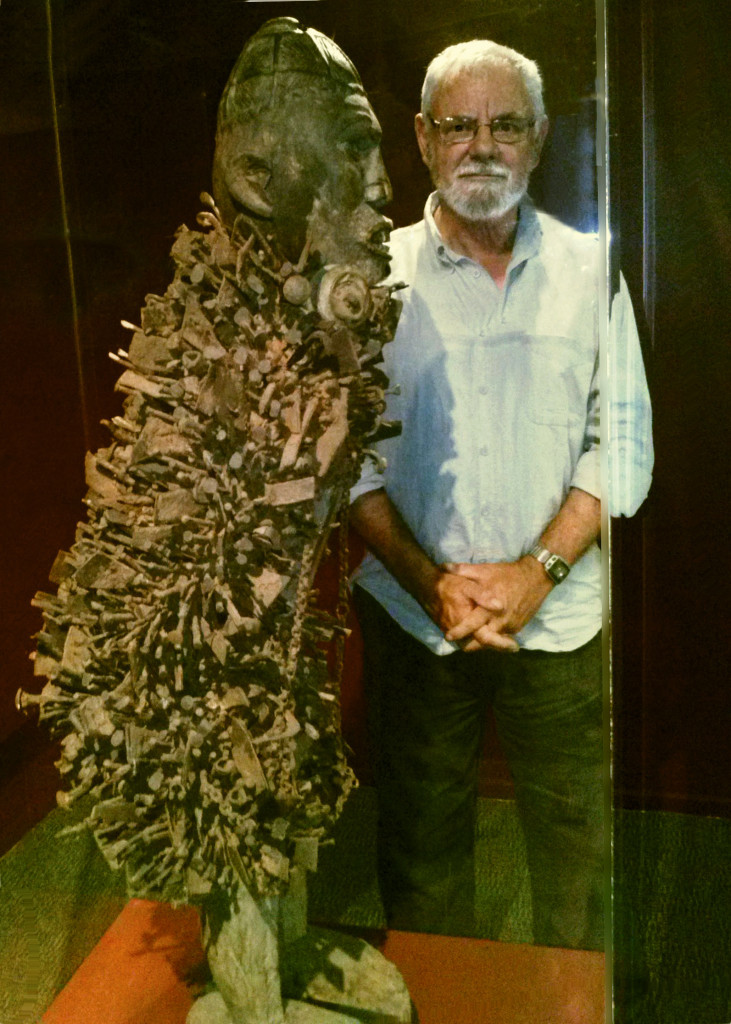 Minkisi collecter Desmond Bovey.
« Back to all exhibitions

The seventy-five statues and masks that compose this exhibition challenge our ideas about art, belief, tradition, and culture. The works are from ethnic groups in nine countries ranging from Ivory Coast to the Democratic Republic of the Congo, with the emphasis on minkisi power figures from the lower Congo. These statues, bristling with nails and laden with magical charms, have given the exhibition its name and much of its impact. Anthropomorphic or zoomorphic, sometimes as big as a man, they project authority and power.
Sculptures like these which so influenced Picasso and friends a century ago are still largely misunderstood. Traditional African art has been neglected, misinterpreted and destroyed for decades, burnt by colonial administrators and missionaries, treated as curios by travelers. Only lately has it taken its rightful place in the galleries and museums of the world. Recently an exhibition featuring minkisi figures at the New York Metropolitan Museum of Art, Kongo: Power and Majesty, attracted record attendances. http://www.metmuseum.org/exhibitions/listings/2015/kongo

How should we look at these objects?

Whether we know it or not, we all have cultural codes that affect our way of looking. When we contemplate an object from a culture foreign to our own, we sometimes have to make a conscious effort to understand the visual language of the artist who made it. To do this we need insight into the artist’s life, society and beliefs. An example of cultural misinterpretation is our sense that nails hammered into a statue represent evil intent, a confusion rooted perhaps in Hollywood notions of voodoo. Despite their fearsome appearance, the role of minkisi is mostly a defensive one. Villagers consulted them to obtain protection from illness and other misfortunes, and to swear oaths and forge pacts.
This exhibition’s aim is to introduce unfamiliar cultures and aesthetic values to antipodean audiences. Minkisi works on several levels; while most of us respond to the immediate visual impact of these exotic and powerful objects, a curious visitor is inevitably sensitive to a deeper spiritual dimension. With this in mind, brief texts are provided for each object, enabling greater insight into its function and meaning, referring when necessary to the complex and sophisticated belief systems condescendingly referred to as Animism.

Where do these objects come from and how did they get here?

In many African societies a mask or statue can outlive its magic. This is especially true for the baKongo and their minkisi. If a statue is considered to have lost its spirit or power, it is abandoned to the weather and termites, or sold. If sold, works that have a religious function are de-consecrated in a ritual performed by a nganga, (priest-diviner-healer). Traces of de-consecration libations are visible on many of the works in this exhibition.
The nucleus of the collection was assembled by Frenchman Paul Le Lay, who from 1946 to 1959 was posted in all of the capitals of French territories in Africa. After Le Lay’s death his collection languished in an attic in Burgundy. Years later it was recovered by his son-in-law, Desmond Bovey, a New Zealander who worked in France as an Art Director and illustrator. During his 30 years in France Bovey’s fascination for these objects grew. In his turn, he made repeated trips to West Africa in a quest to understand the works and the belief systems that produced them. Back in New Zealand, it is Bovey’s wish that these objects, so little understood, and the unknown artists who made them, be accessible to a wider audience.
The result has been a stunning visual experience at the participating NZ venues to date. Minkisi has great pulling power and attracts visitors beyond the usual gallery habitués, including international visitors, who have responded particularly well. Many return for repeat visits. Dramatic and powerful, minkisi provides a new and exciting range of experiences for discerning visitors. In the words of one visitor: “No wonder we talk past each other; the way we make meaning of life is so different.”
Following its success in Whanganui (extended due to popular demand) Timaru and Nelson, Minkisi is now being made available to galleries throughout New Zealand and Australia.

“Minkisi is a global exhibition that examines cultures far from ours. It is challenging. It makes us think twice. And that is the role of galleries and museums. The Minkisi season has been extended significantly due to popular demand. To Desmond Bovey I give my congratulations and thanks. A grand show, a grand theme and a magnificent presentation.” Dr Eric Dorman, Director, Whanganui Regional Museum,

“The exhibition was very well recieved by the public. Comments passed to us by many visitors that it was a priviledge to have such an exhibition in Nelson totally accords with our view. It was a priviledge! International visitors remarked that they wouldn’t be able to find such a comprehensive selection of African material even in major cities in Europe. It was also great to see people sketching in the gallery – which promotes close scrutiny and appreciation.”
Julie Catchpole, Director, Suter Art Gallery, Nelson,

From the visitors’ book, The Suter
“Fantastic! Reminds me of the Menil Collection in Houston.”
“Magical, wonderful, true art.”
“Astounding and immense, impressive collection!”
“Sensational, so lucky to see it.”
“Stunning. Very well displayed.”
“Congratulations over and over!!”
“The best collection of traditional African art in Australasia.”
“Eye-opening.”
“Inspiring, very expressive,beautifully creative in many materials. Thank you for sharing them!!”
“Powerful, alien, fascinating!”
“Wow, so privileged to have this exhibiton here – troubling, though.”
“I love this. It has been an amazing experience.”
“They are all amazing!!”
“Very thought-provoking show.”
“This is the most wonderful collection of African statues I have ever seen. The beliefs are expressed in a symbolic harmony with mystic, but real, works of art.”
“A very strong presence.”
“Powerful.”
“What amazing creativity. Thanks for sharing it.”
“No wonder we talk past each other; the way we make meaning of life is so different.”
“Powerful and intriguing show. Beautiful.”
“My second visit – amazing. Never seen these before, and I lived in W.Africa!”
“Awesome. Wicked!!”
“Fucking badass!!!!”
“Wonderfully informative and enlightening.”
“Excellent exhibition. First class pieces!”
“Brilliant! Thank you so much to Bovey for lending them out.”

-Desmond Bovey is available for a talk about his voyages to Africa and his quest for understanding of the works in his collection and the belief systems that created them.
-Educator Ester McNaughton of the Suter Art Gallery, Nelson, brought classes to discuss and draw statues and masks. In 5 weeks 730 children visited the exhibition. (Total visitors: 7570.)

A small but informative catalogue was produced for the Whanganui Regional Museum exhibition, 28 pages with 2 cover flaps, colour-coded to the 3 regions around which the exhibition is organised. Created in InDesign, it could easily be adapted for reprint.