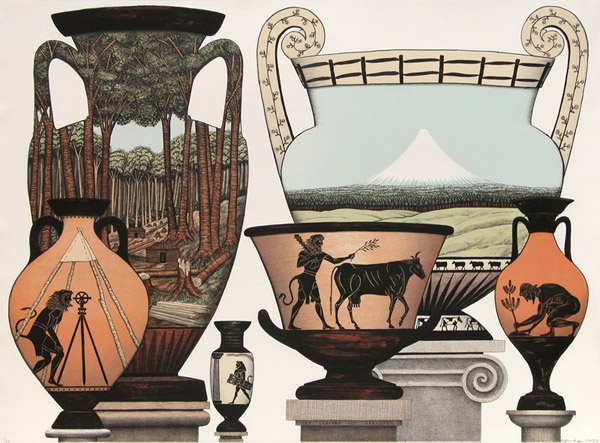 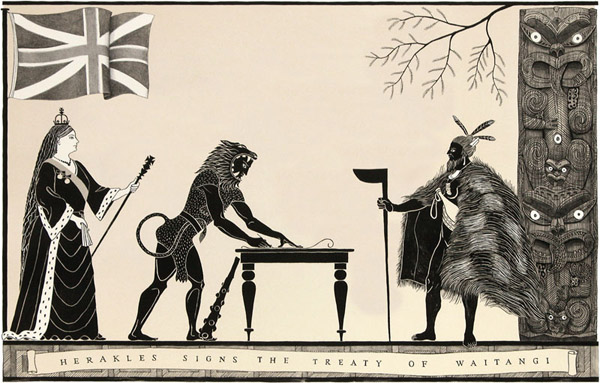 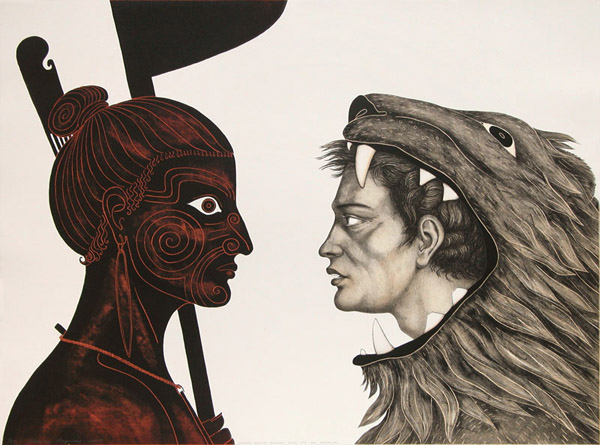 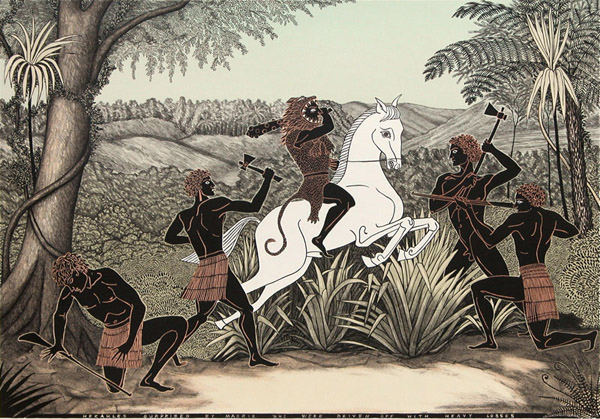 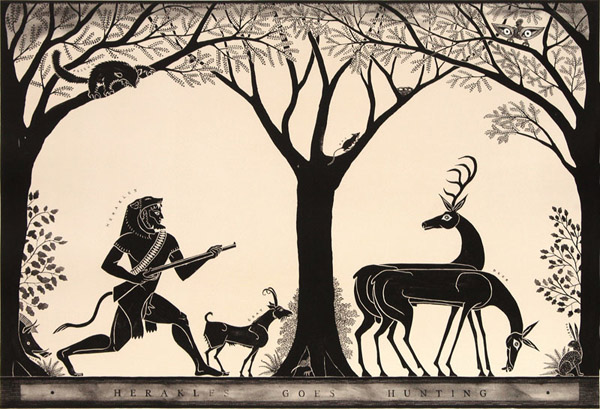 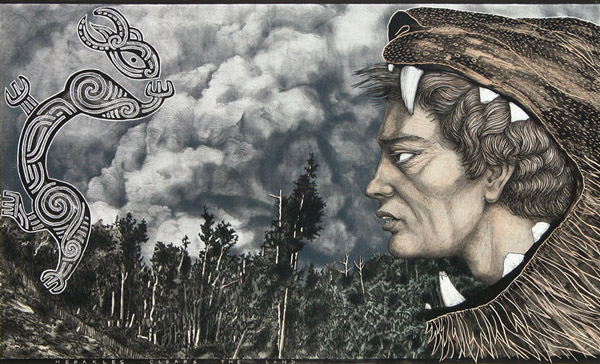 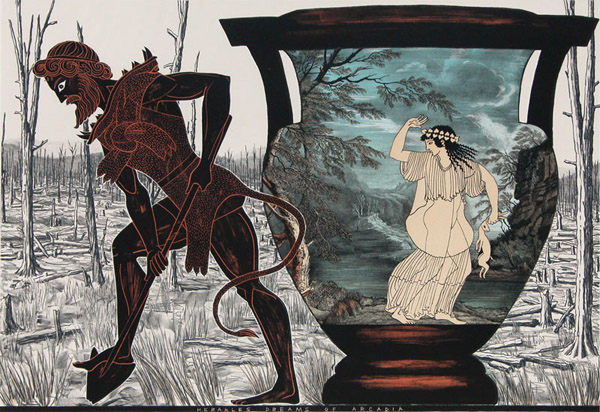 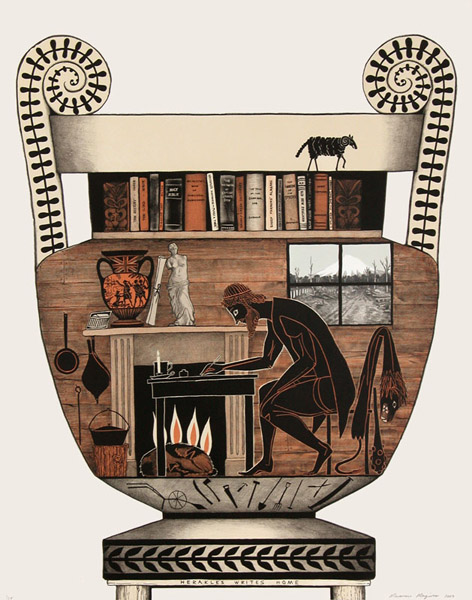 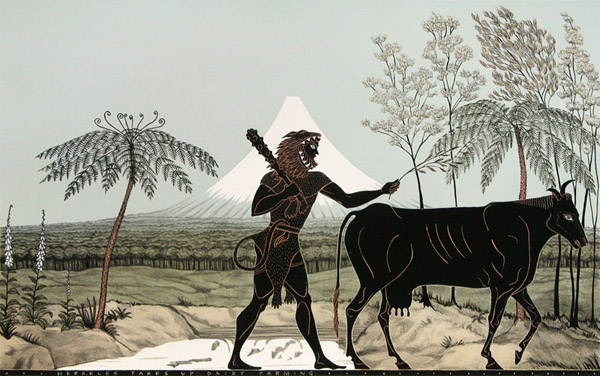 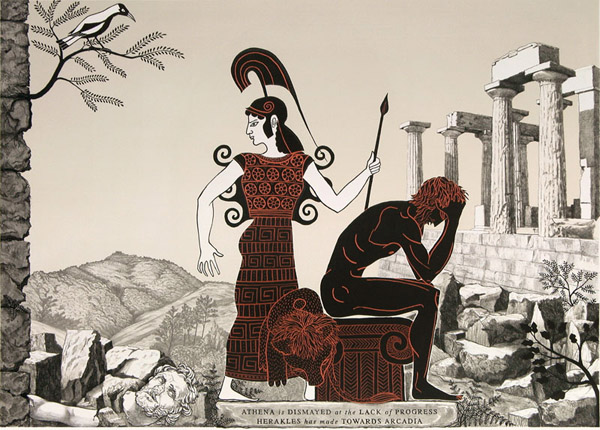 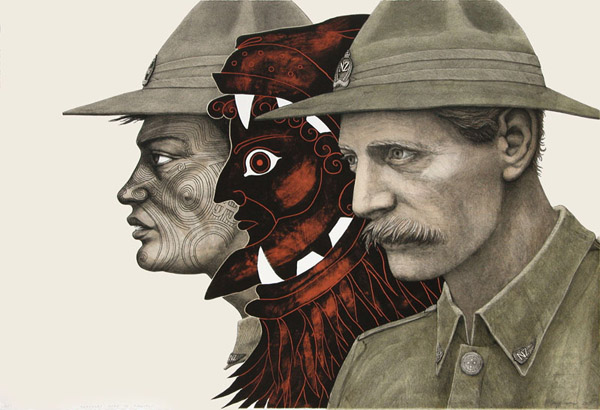 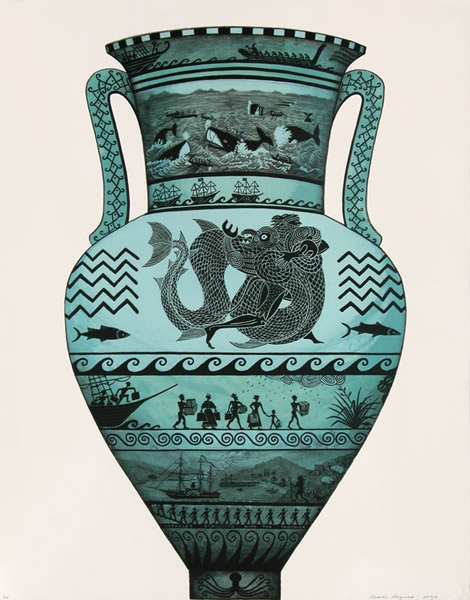 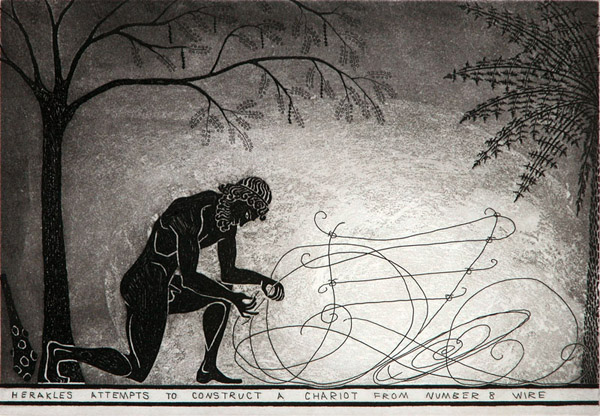 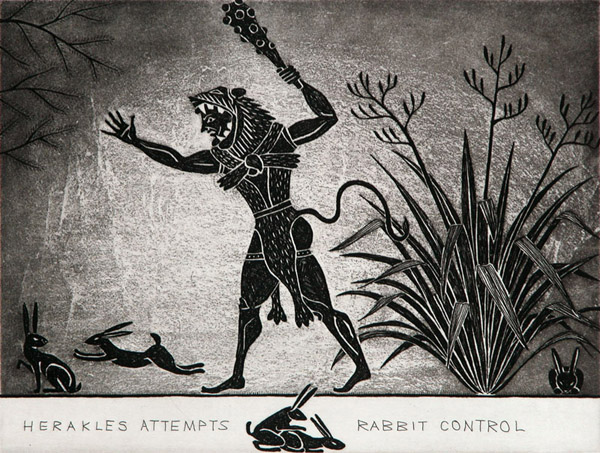 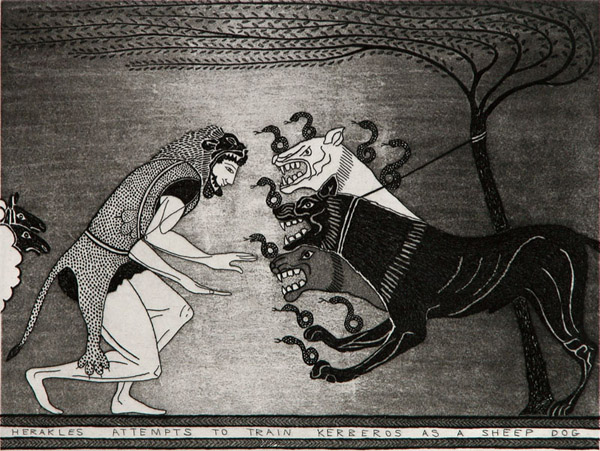 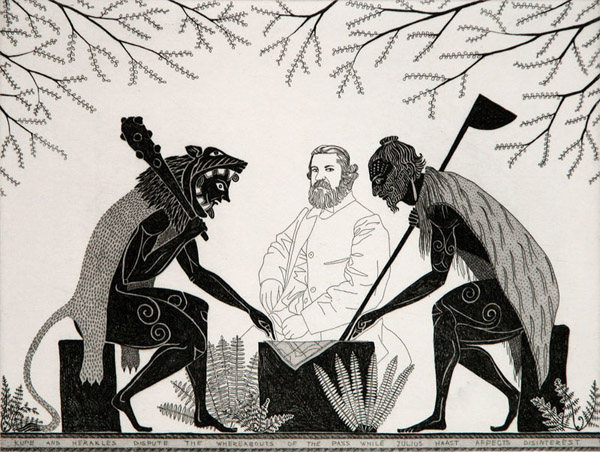 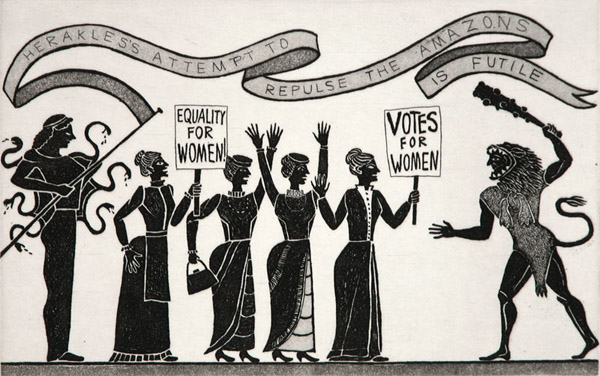 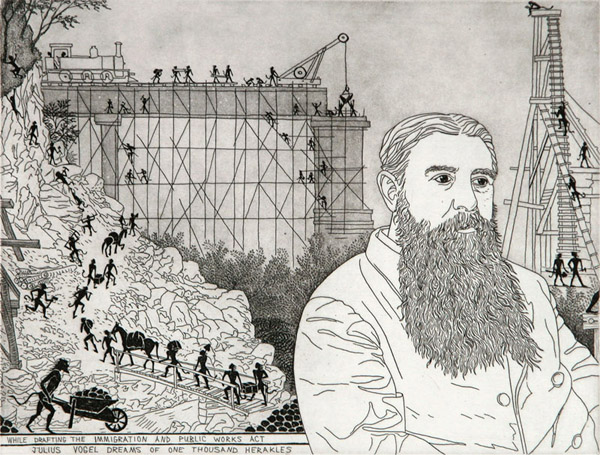 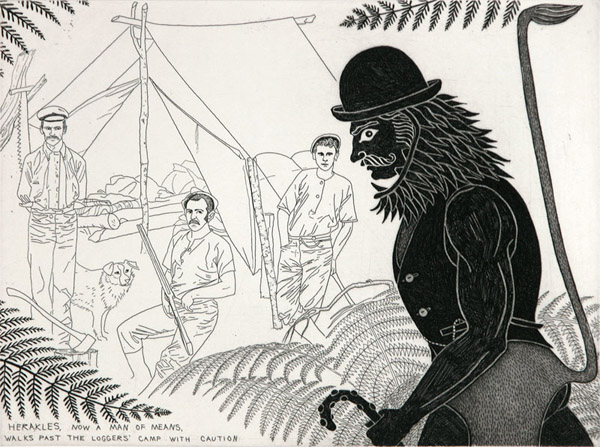 The Labours of Herakles

Lithographs and etchings by Marian Maguire.

Having arrived via the Endeavour during Maguire’s series, ‘The Odyssey of Captain Cook‘, the ancient Greeks resolve to settle the New Land. In this collection of twelve lithographs and eight etchings, the archetypal hero is cast as New Zealand colonist.

His objective: to claim and tame the land. But the process is unsettling.

Maguire’s Odyssey of Captain Cook was a play between three cultures: Maori at the moment of contact with Europe; ancient Greece, cited as western civilisation’s source; and the Britain of Captain Cook’s era, ‘The Age of Enlightenment’, a time of renewed interest in Classical thought and style. The West having arrived the next step was to colonise.

“Herakles, or Hercules as the Romans knew him, the embodiment of courage and strength of classical legend, has crossed the seas of time to transform the New World for those who would follow… Whether he is clearing forests and felling trees, battling with Maori warriors, writing letters home from Taranaki, or standing up to be counted at Gallipoli, Herakles appears as well focused on the tasks at hand as he was confronting the 12 Labours requested by King Eurystheus of Tiryns . . . killing the monstrous Nemean Lion, capturing the Cerynian Hind, cleaning the Augean Stables and so on… [Maguire] has combined authoritative borrowings and reworkings of earlier images – historical lithographs, pre-colonial drawings, old photographs, and the art and text of classical vases – to present layer upon layer of detailed myth and meaning, reference and allusion, appropriation and reinterpretation.

The lithographs in The Labours of Herakles exhibition are an elegant and often humorous union of the ancient and the colonial: of Herakles wrestling not a minotaur or a lion but a taniwha; of the Amazons as suffragettes; of Athena scolding him for his lack of progress; of Herakles trying to construct a chariot from No. 8 wire.”   excerpted from an article by Rosa Shiels (The Press, Christchurch, NZ, June 11, 2008).

Herakles was no Odysseus, no leader of men. Wise and resourceful Odysseus, like James Cook, captained his ship intelligently, he made decisions for both himself and his oarsmen. Herakles, clad in lion-skin and wielding his club, displays other characteristics. He is strong, persistent, resilient. He never led an army, he worked alone. Set a challenge he will do his absolute utmost to see the task successfully completed without, for a moment, questioning the rights or wrongs of the instruction. The qualities Herakles displays – strength, patience, invention, fortitude – would have advantaged any pioneer tasked with transforming this country.

In ‘The Labours of Herakles’ Maguire casts him as New Zealand pioneer but unlike the hero of classical mythology Maguire’s Herakles is not always successful. Despite his considerable physical ability, the hugeness of the task ahead at times dismays him. He makes mistakes, he is set upon by doubt. The Arcadia of his dream is within no easy reach and while, for the most part, he can reflect upon his labours with a pride, his satisfaction is tinged with discomfort.

Born in Christchurch in 1962, Marian Maguire graduated from the Ilam School of Art, University of Canterbury, in 1984, having majored in printmaking. During 1986 she studied at the Tamarind Institute of Lithography, Albuquerque, USA, and alongside making her own work she has pursued a career as a collaborative master printer, in which capacity she has printed the work of some of New Zealand’s leading artists. Maguire set up Limeworks print studio with Stephen Gleeson in 1987 and in 1996 established PaperGraphica print studio and gallery. From 1993 to 1996 she taught printmaking part-time at Ilam School of Art, University of Canterbury. She was awarded an Artist in Residence at the Otago Polytechnic School of Art in 1991 and received an Award for Excellence from the Canterbury Community Trust in 1998.

Marian Maguire has exhibited throughout New Zealand. Her early work was mainly figurative and gestural but in the early nineties she shifted her subject to emblematic images of gates, archways and bridges. Her exhibitions include Library Travelling (McDougall Art Annex, Christchurch, 1996), in which she incorporated imagery from a wide range of historical sources with gates, archways, bridges, architectural plans and imaginary travelling, linking sixty six small etchings and three large composite prints in a loose narrative. Perfect Planning (Centre of Contemporary Art, Christchurch 1996; Lesley Kriesler Gallery, New Plymouth, 1997) and Regarding the Renaissance (Centre of Contemporary Art 1997) followed and in these series of paintings she explores the relationship between the architects of the Italian rRenaissance and the art, architecture and mathematics of ancient Greece.

Through this enquiry into Greek art she became interested in black- figure vase painting and producesd two exhibitions, Vases & Narratives (Centre of Contemporary Art, Christchurch 1999) and Mythical Landscapes (Eastern Southland Art Gallery, Gore, 2000, Centre of Contemporary Art, Christchurch, 2000). In Mythical Landscapes she beganins to set Greek heroes in the New Zealand landscape. In Southern Myths (PaperGraphica, Christchurch, 2002; Auckland Art Gallery, 2005) she extends this idea into a series of nine etchings threaded on an adapted plot line from The Iliad. Forest, her next exhibition (PaperGraphica, 2003), was an installation of abstracted, geometric trees, inspired by Greek vase painting and painted on loose canvas. She returneds to a narrative theme in The Odyssey of Captain Cook (Otago Museum, Dunedin, 2005;, PaperGraphica, 2005;, Millennium Art Gallery, Blenheim, 2006;, Lopdell House, Titirangi, 2006) and in this series of lithographs and etchings the Endeavour is the vehicle by which the ancient Greeks collide with resident Maori. While working on the current series Maguire also made The Paper Garden, in which she combines patterning from Greek vase painting with her own observation of nature (PaperGraphica, 2007), and she contributed to the exhibition of Deities and Mortals, in which eight artists were asked to respond to the items from the Logie Collection of classical artefacts (Christchurch Art Gallery, 2007).

Ninety-six page colour catalogue including essays by Professor Elizabeth Rankin and Dr Patrick O’Sullivan, plates of all exhibition prints and a contexual selection of historical extracts and photographs from NZ pioneers.