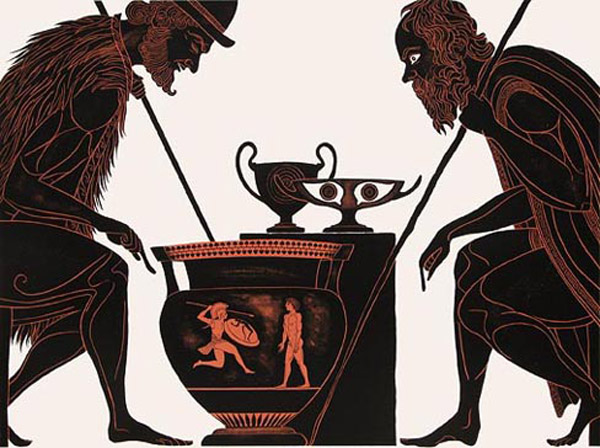 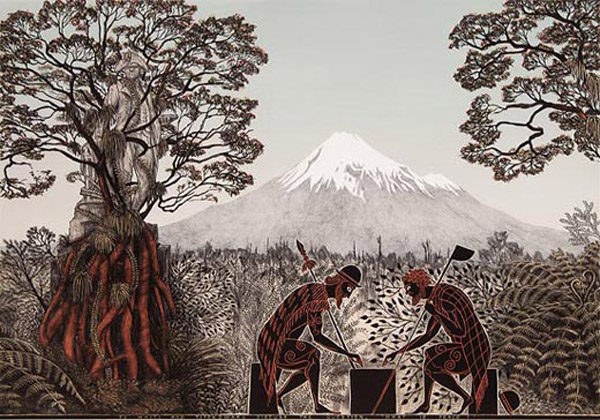 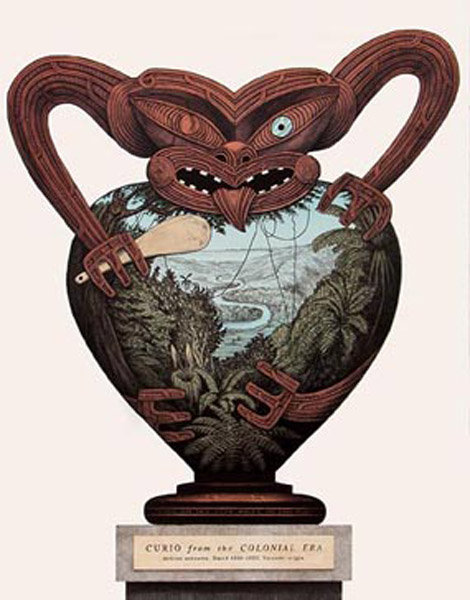 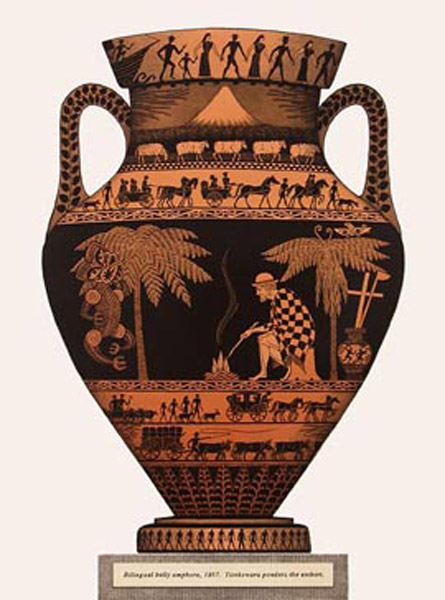 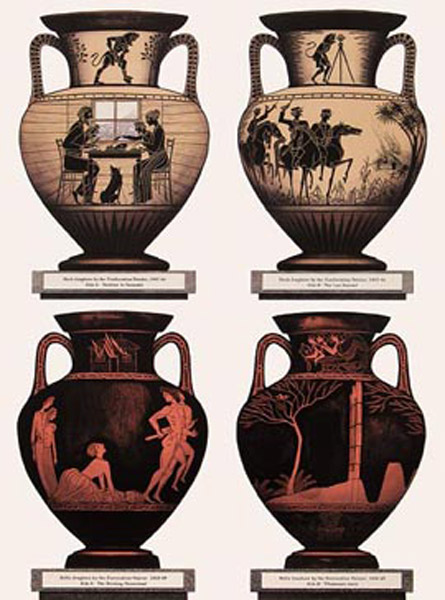 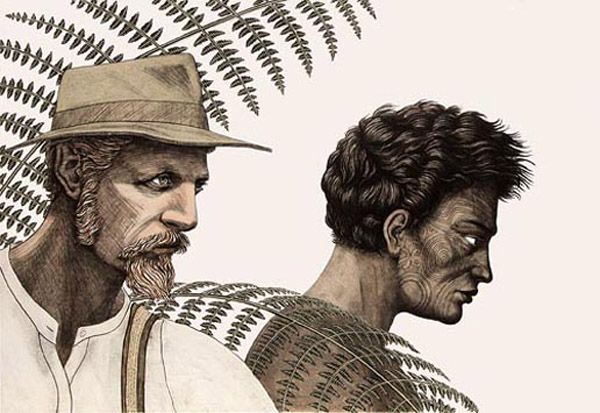 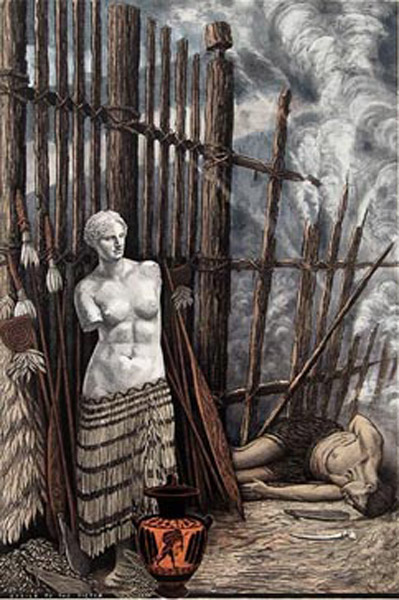 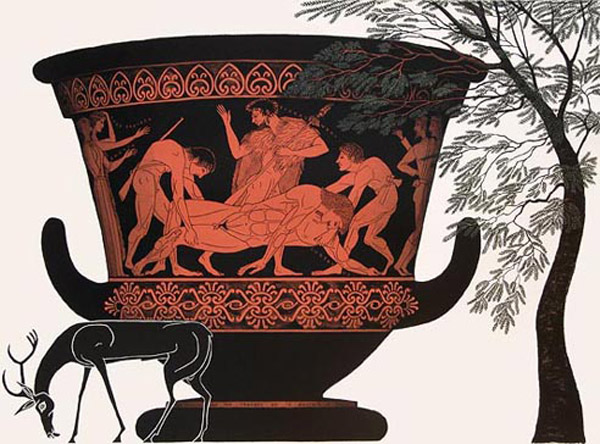 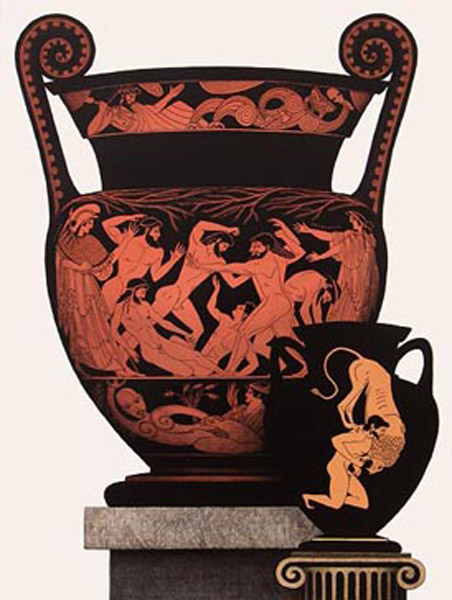 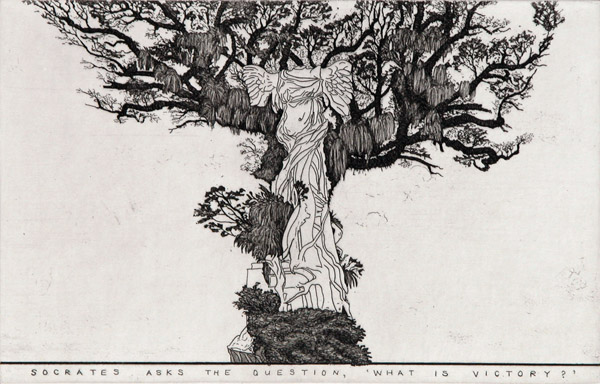 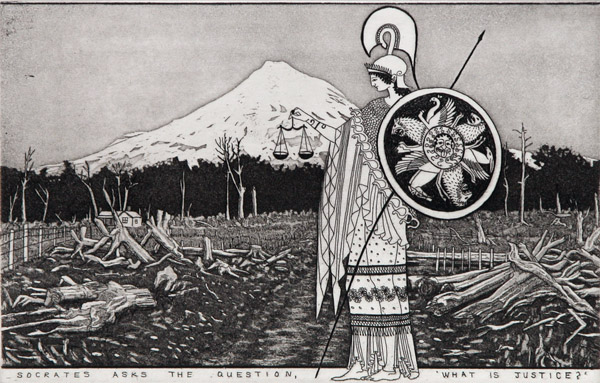 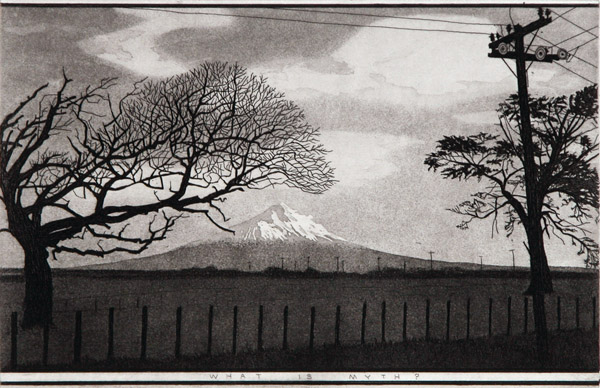 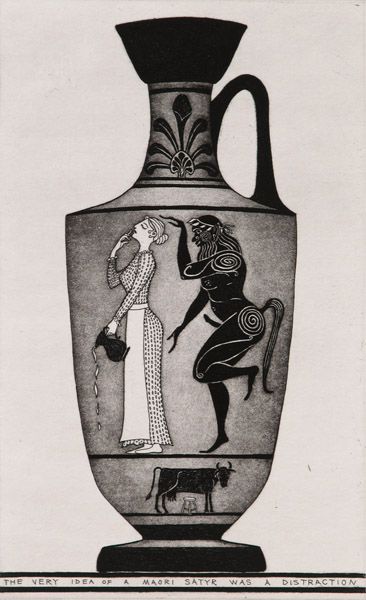 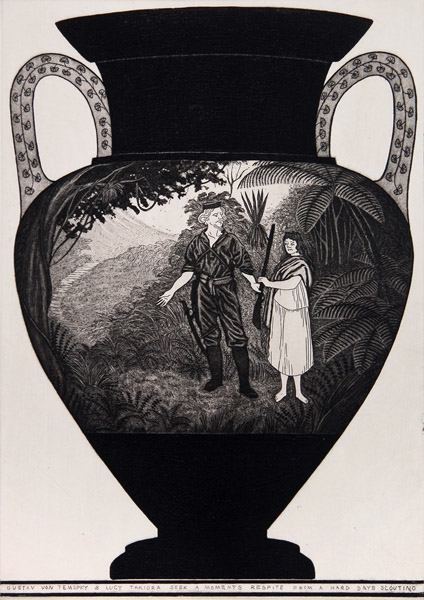 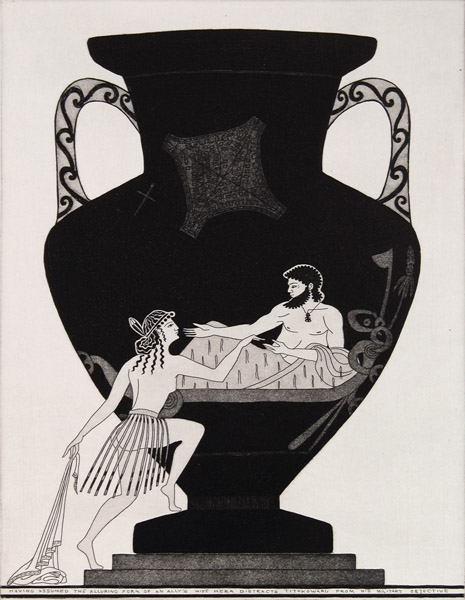 A new series of lithographs and etchings by artist Marian Maguire.

The protagonist of Marian Maguire’s new print series, Titokowaru’s Dilemma, is an impressive figure who embodies the complexities and contradictions of nineteenth-century New Zealand history. T?tokowaru was a trained M?ori tohunga but a Christian convert; an advocate of peace but an outstanding military strategist; a powerful and charismatic leader but one who lost the support of his followers. Rather than simply confusing us, these diverse characteristics offer a more nuanced understanding of T?tokowaru than we might have of more conventional early New Zealanders. And it was this that made him an absorbing subject for Maguire, whose prints exploring colonial history challenge simplistic readings of the past.

Living in the Taranaki district, T?tokowaru was involved in battles against the British in the early 1860s, but then led a number of important initiatives promoting peace with settlers. When continuing land confiscations pushed M?ori into war to avoid starvation, he first resorted to plunder without bloodshed then, in a situation of escalating conflict, deployed an effective combination of fear-provoking propaganda, clever field-engineering and guerrilla tactics to overcome British troops far superior in number to his own. The unexpected dissolution of T?tokowaru’s army in 1869 after a series of victories, reputedly because he undermined his mana by sleeping with the wife of an ally, did not diminish his reputation among settlers as a formidable opponent, and an uneasy peace was maintained. Further land deprivations led to a campaign of passive resistance in which T?tokowaru took part alongside Te Whiti and Tohu. Resistance was finally quashed in a massive show of force by the British at Parihaka in 1881, which decimated M?ori power in the area and saw T?tokowaru imprisoned a number of times before his death in 1888.

In these prints, Maguire continues to develop her distinctive imagery drawn from ancient and colonial sources. The bold silhouettes of Greek vase paintings are particularly evident in her black-and-white etchings, such as those depicting amorous adventures involving Greek gods, M?ori maidens, satyrs and settlers, in a series entitled Colonial Encounters. In the large colour lithographs ofTitokowaru’s Dilemma, figures of similar style and clarity are set into New Zealand landscapes based on colonial paintings and photographs. In Maguire’s intriguing cultural crossovers, we find such unexpected meetings as Socrates in discussion with T?tokowaru, Persephone keeping company with Hine-nui-te-p? in the underworld, and Zeus stalking Papa in a Whangarei landscape. Figures are transposed into unexpected historical settings, with Gustavus von Tempsky dying on the battlefields of Troy, Venus de Milo taken captive in a M?ori p?, and the Christchurch statue of Captain Cook entangled in rata roots in the Taranaki bush. Such intriguing visual inventions continually surprise and delight us, and tease our imaginations with human connections across time.
Presenting T?tokowaru more as a thinking man than a fighter, Maguire frames his story in terms of the kind of questions that Socrates asked – we discover him debating ‘what is virtue?’ with Socrates, or discussing ‘what is peace?’ with his compatriot Te Whiti. The fact that, though pictured against Mount Taranaki, these paired figures mimic the pose of Achilles and Ajax from a famous black-figure vase by the Greek potter and painter Exekias, forges links between New Zealand and ancient Greece, showing that these debates have a timeless significance.

In A Taranaki Dialogue, the enquiry continues in a series of small etchings of the Taranaki landscape, finally focusing on two questions that seem to underpin Maguire’s project as a whole: it is she, as much as Socrates or T?tokowaru, who asks us, ‘what is myth?’ and ‘what is history?’. Elizabeth Rankin 2011

Born in Christchurch in 1962, Marian Maguire graduated from the Ilam School of Art, University of Canterbury, in 1984, having majored in printmaking. During 1986 she studied at the Tamarind Institute of Lithography, Albuquerque, USA, and alongside making her own work she has pursued a career as a collaborative master printer, in which capacity she has printed the work of some of New Zealand’s leading artists. Maguire set up Limeworks print studio with Stephen Gleeson in 1987 and in 1996 established PaperGraphica print studio and gallery. From 1993 to 1996 she taught printmaking part-time at Ilam School of Art, University of Canterbury. Currently Maguire works almost full-time on her own work.

Marian Maguire has exhibited throughout New Zealand. Her early work was mainly figurative and gestural but in the early nineties she shifted her subject to emblematic images of gates, archways and bridges. Her exhibitions include Library Travelling (McDougall Art Annex, Christchurch, 1996), in which she incorporated imagery from a wide range of historical sources with gates, archways, bridges, architectural plans and imaginary travelling, linking sixty-six small etchings and three large composite prints in a loose narrative. Perfect Planning (Centre of Contemporary Art, Christchurch 1996; Lesley Kriesler Gallery, New Plymouth, 1997) and Regarding the Renaissance (Centre of Contemporary Art, 1997) followed and in these series of paintings she explores the relationship between the architects of the Italian Renaissance and the art, architecture and mathematics of ancient Greece.

Through this enquiry into Greek art she became interested in black-figure vase painting and produced two exhibitions, Vases & Narratives (Centre of Contemporary Art, 1999) and Mythical Landscapes (Eastern Southland Gallery, Gore, 2000, Centre of Contemporary Art, 2000). In Mythical Landscapes she began to set Greek heroes in the New Zealand landscape. In Southern Myths (PaperGraphica, Christchurch, 2002; Auckland Art Gallery, 2005) she extends this idea into a series of nine etchings threaded on an adapted plotline from the Iliad. Forest, her next exhibition (PaperGraphica, 2003), was an installation of abstracted, geometric trees, inspired by Greek vase painting and painted on loose canvas.

She returned to a narrative theme in The Odyssey of Captain Cook (Otago Museum, Dunedin, 2005; PaperGraphica, 2005; Millennium Art Gallery, Blenheim, 2006; Lopdell House, Titirangi, 2006) and in this series of lithographs and etchings the Endeavour is the vehicle by which the ancient Greeks collide with resident Ma¯????ori. While working on her next narrative print series, The Labours of Herakles, Maguire also made The Paper Garden, in which she combines patterning from Greek vase painting with her own observation of nature (PaperGraphica, 2007), and she contributed to the exhibition of Deities and Mortals, in which eight artists were asked to respond to the items from the Logie Collection of classical artefacts (Christchurch Art Gallery, 2007).

The Labours of Herakles series of lithographs and etchings, in which she casts the Greek hero as a New Zealand pioneer, was first realeased at PaperGraphica in 2008. It has since been on a twenty venue tour throughout New Zealand which finishes October 2012; the tour is organized by Exhibition Services. Half of the Herakles series was also shown at Impact 7: International Multi-disciplinary Printmaking Conference (Monash University, Melbourne, Australia 2011).