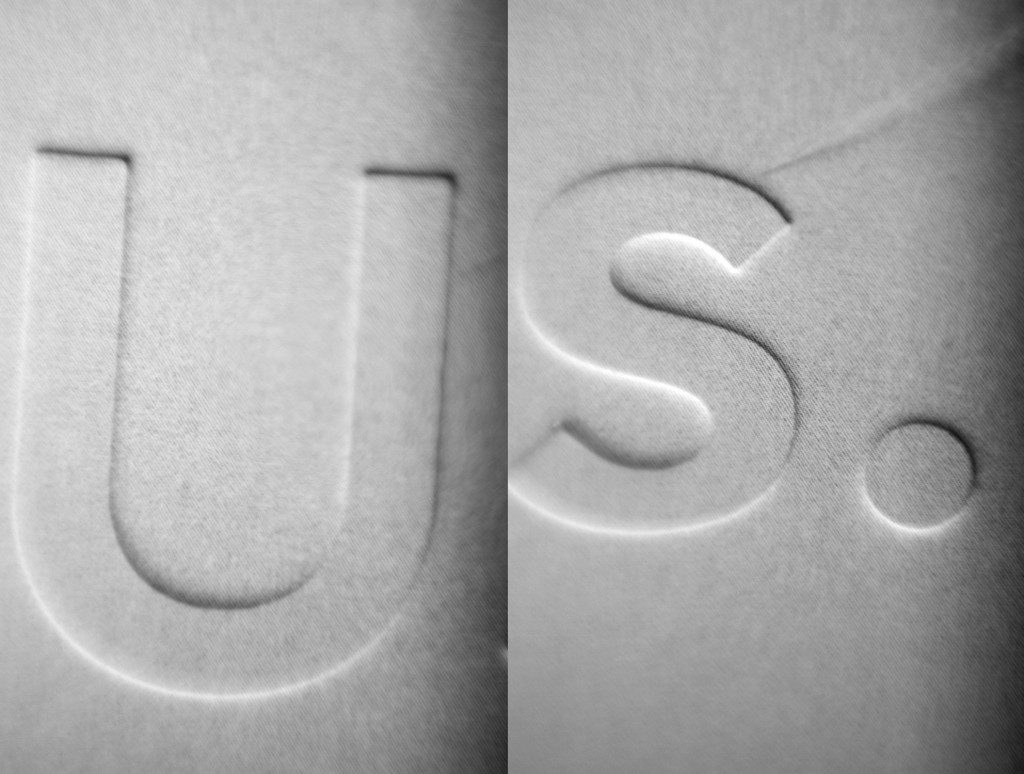 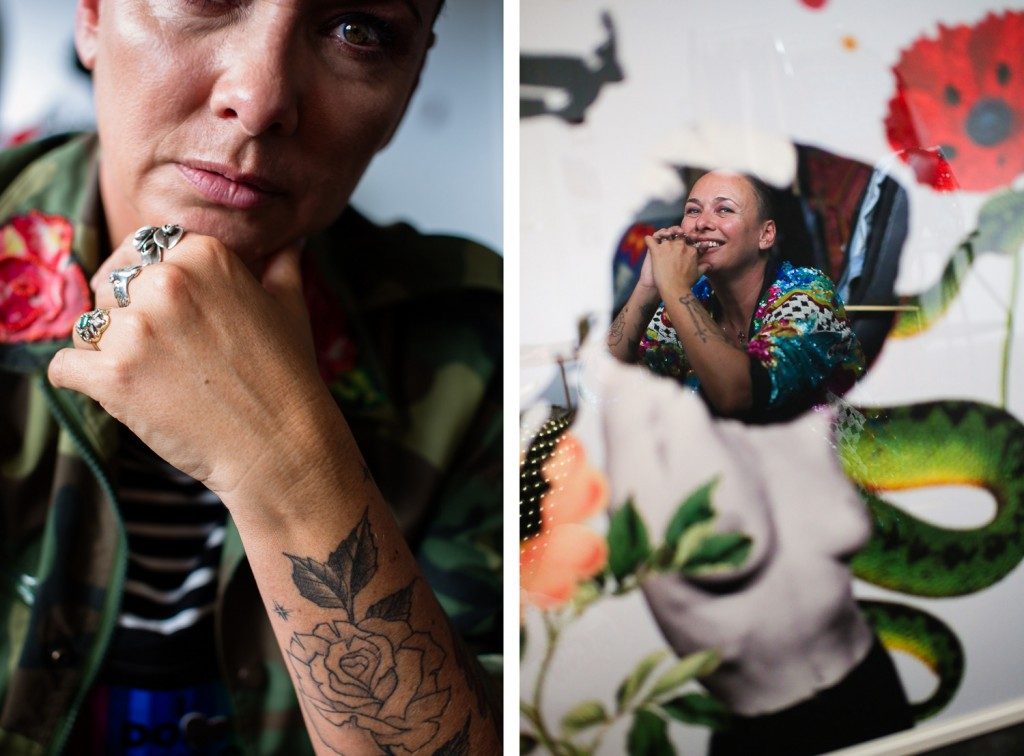 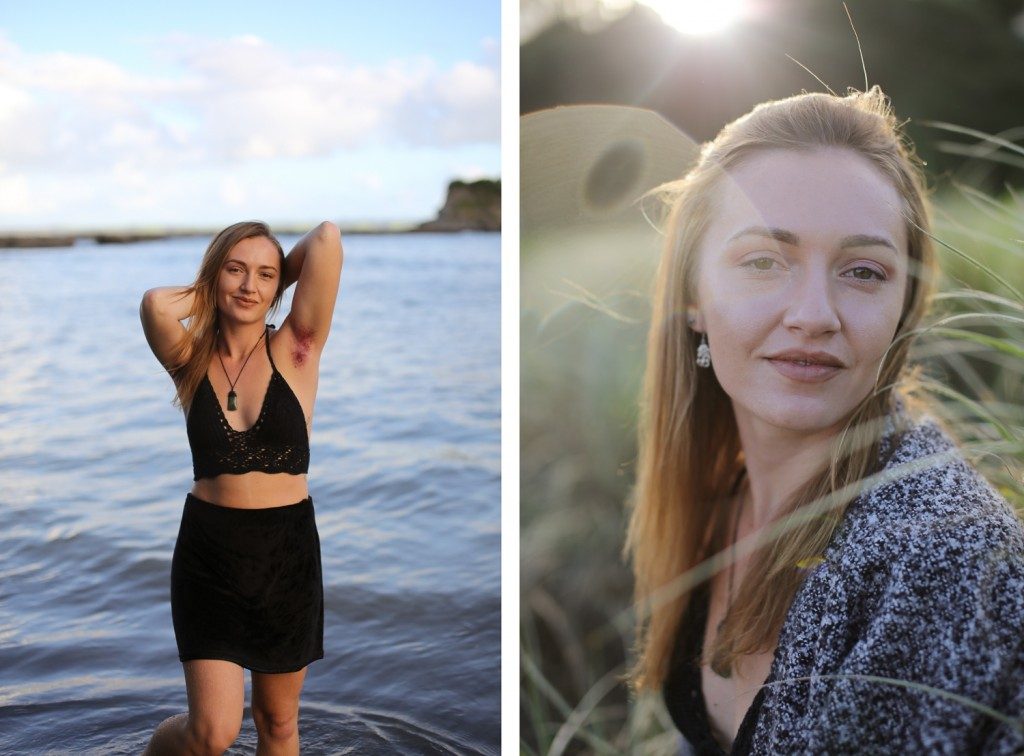 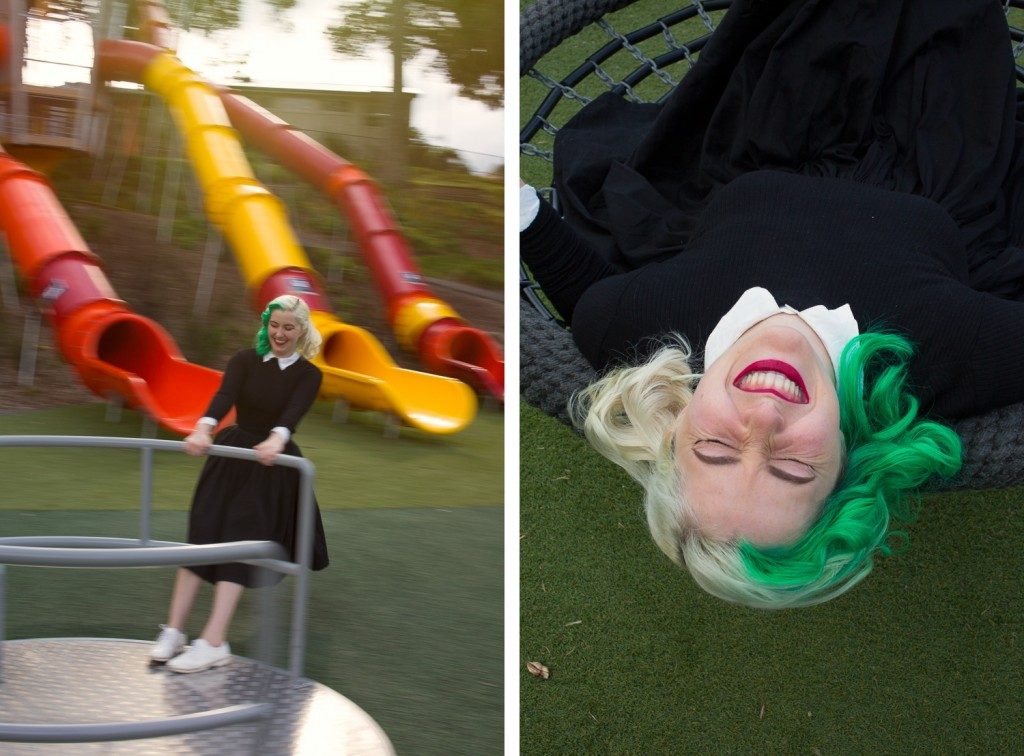 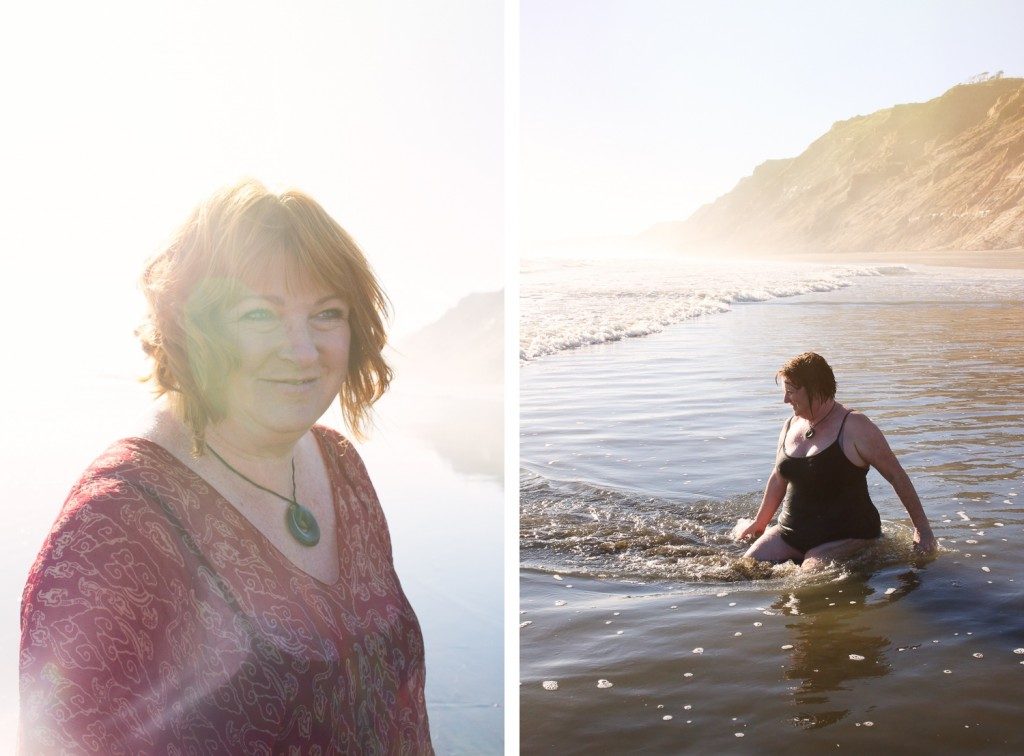 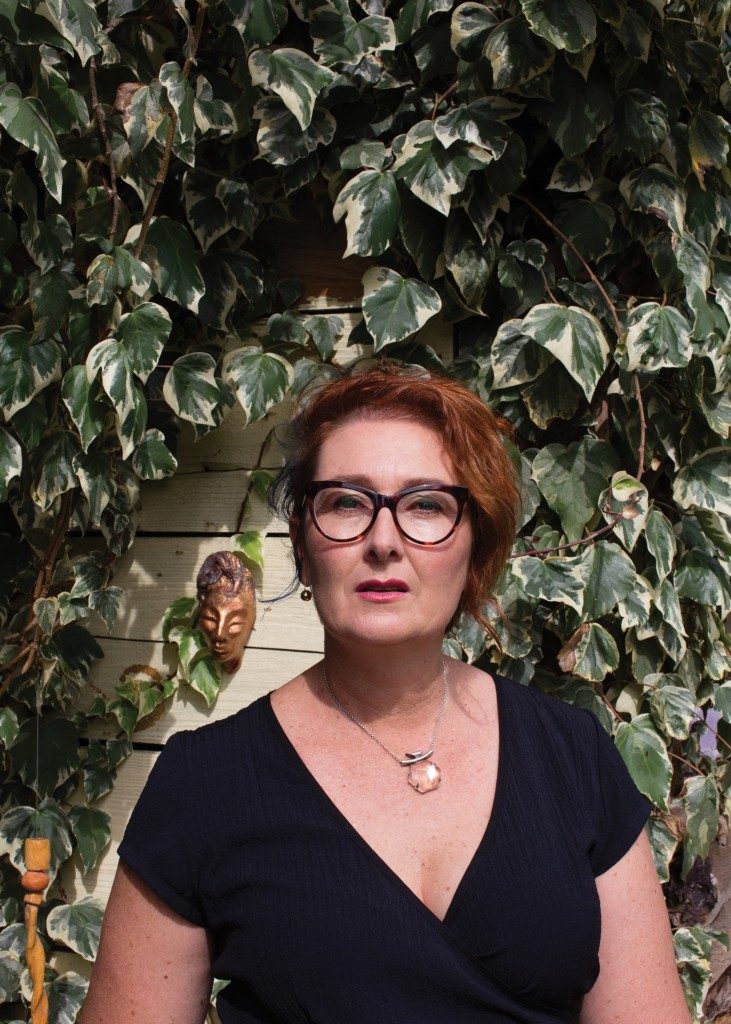 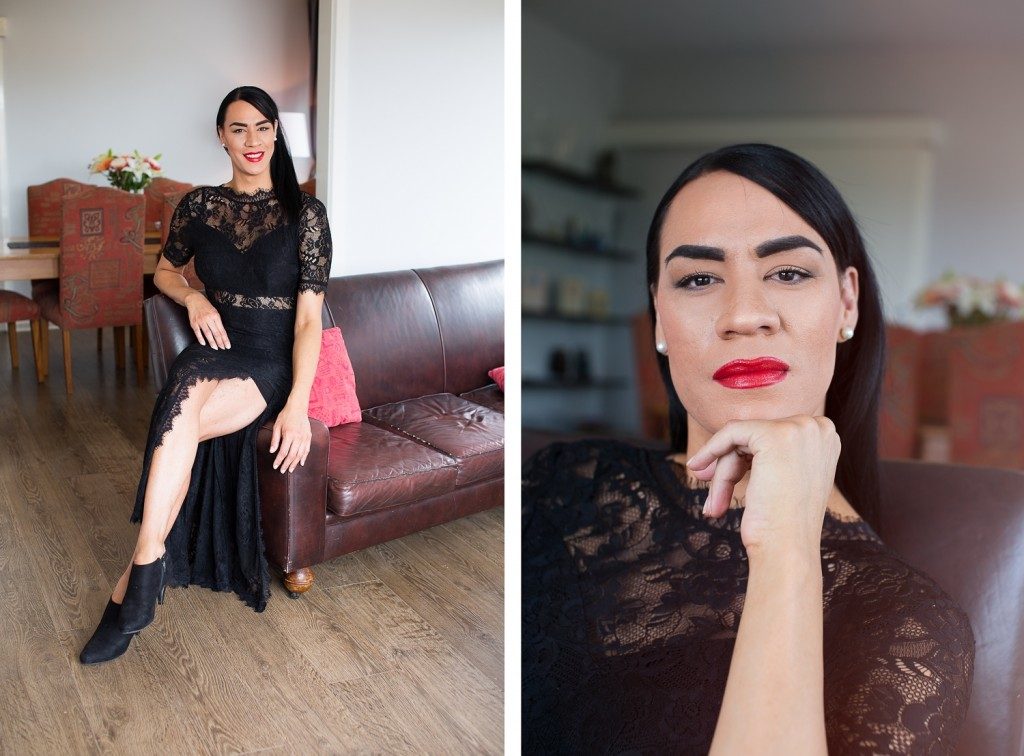 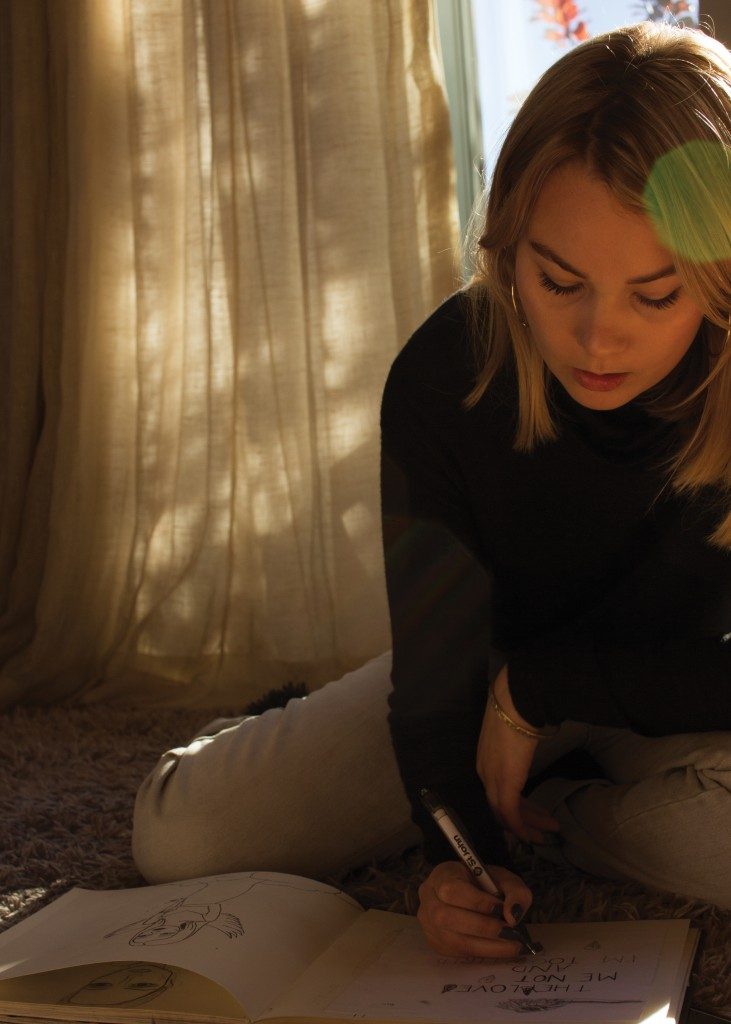 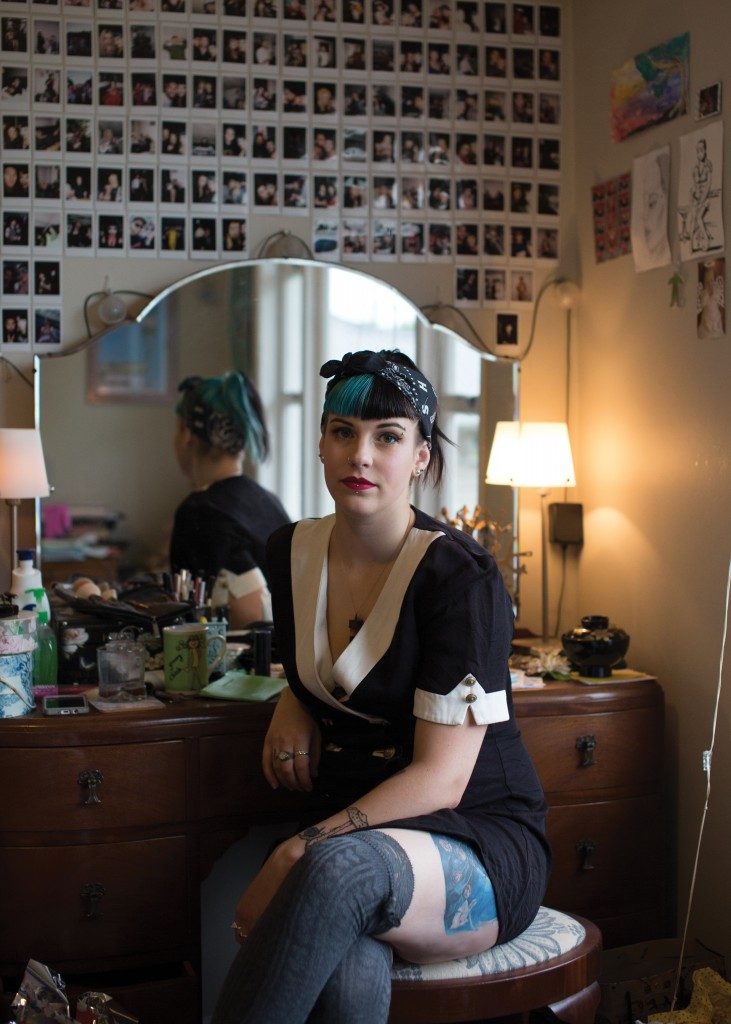 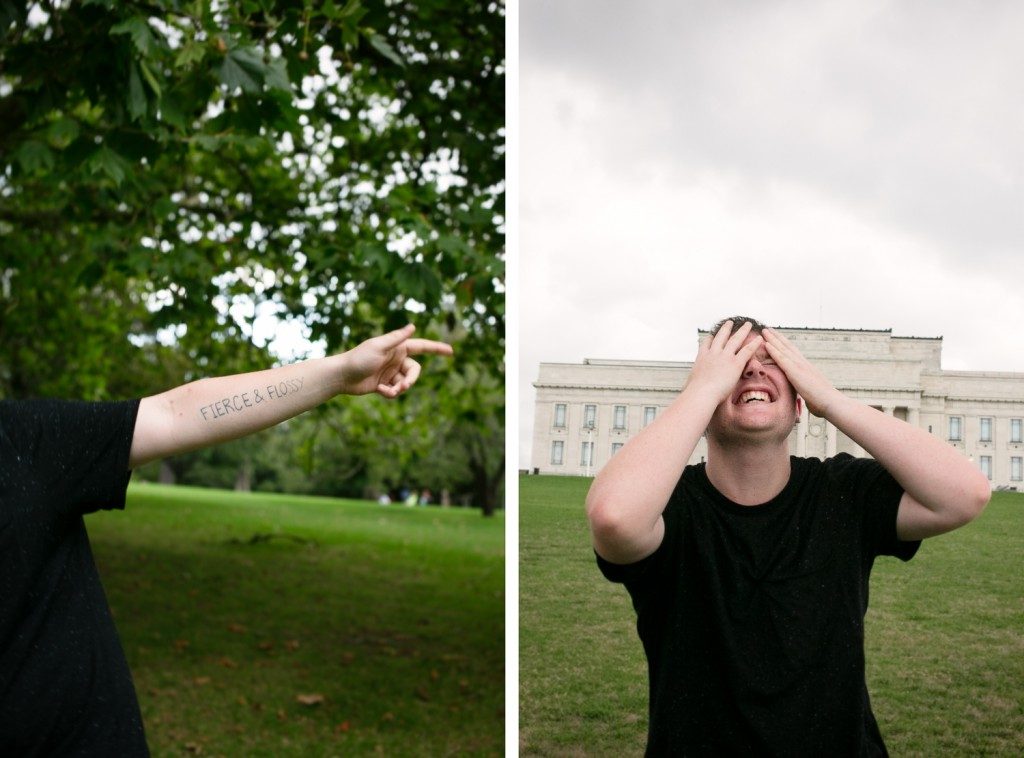 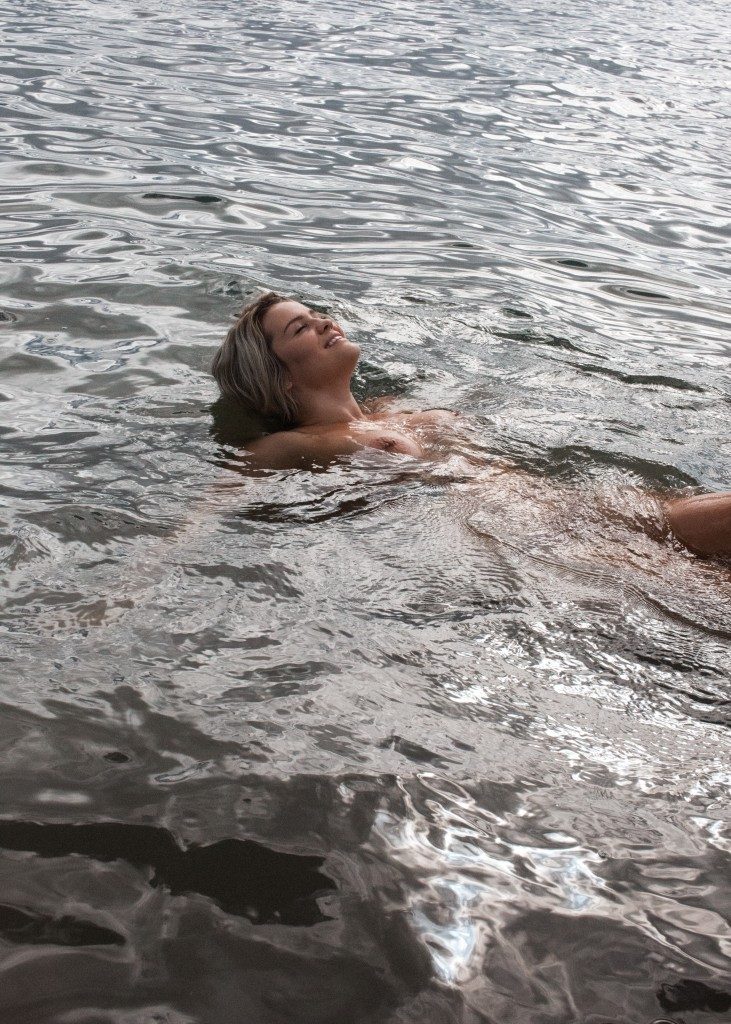 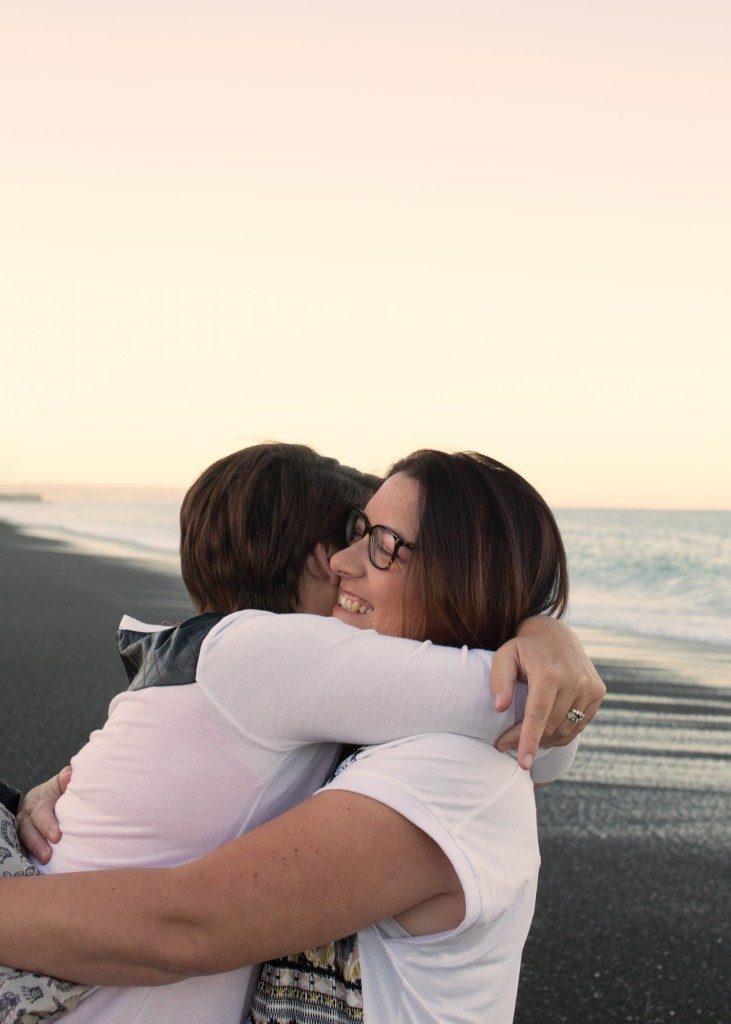 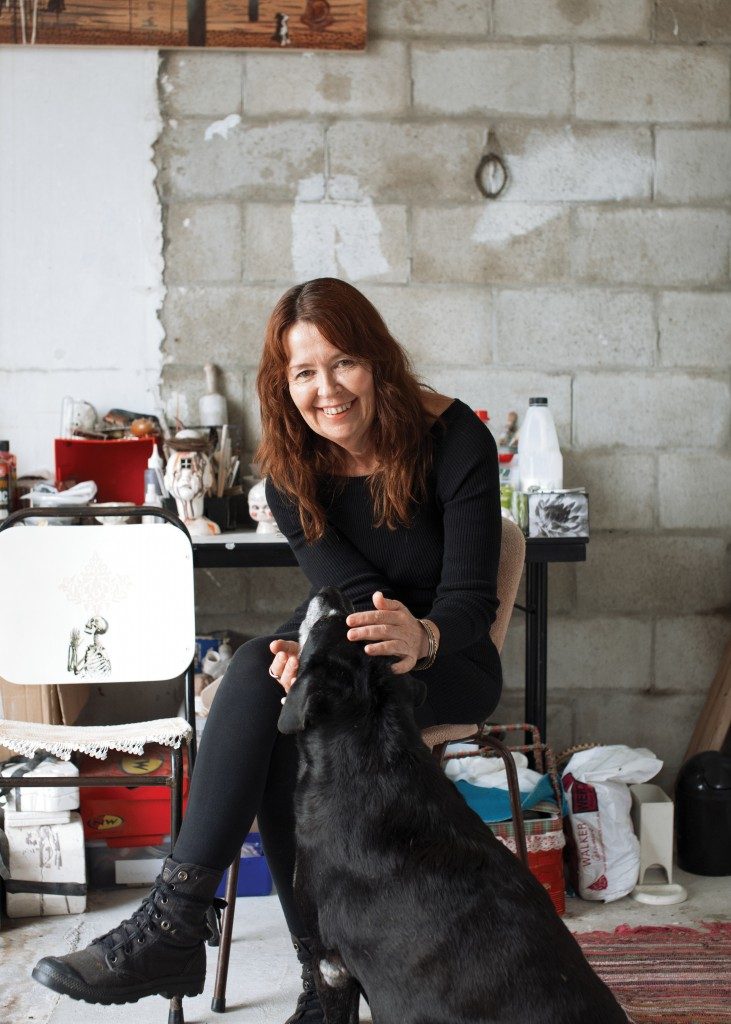 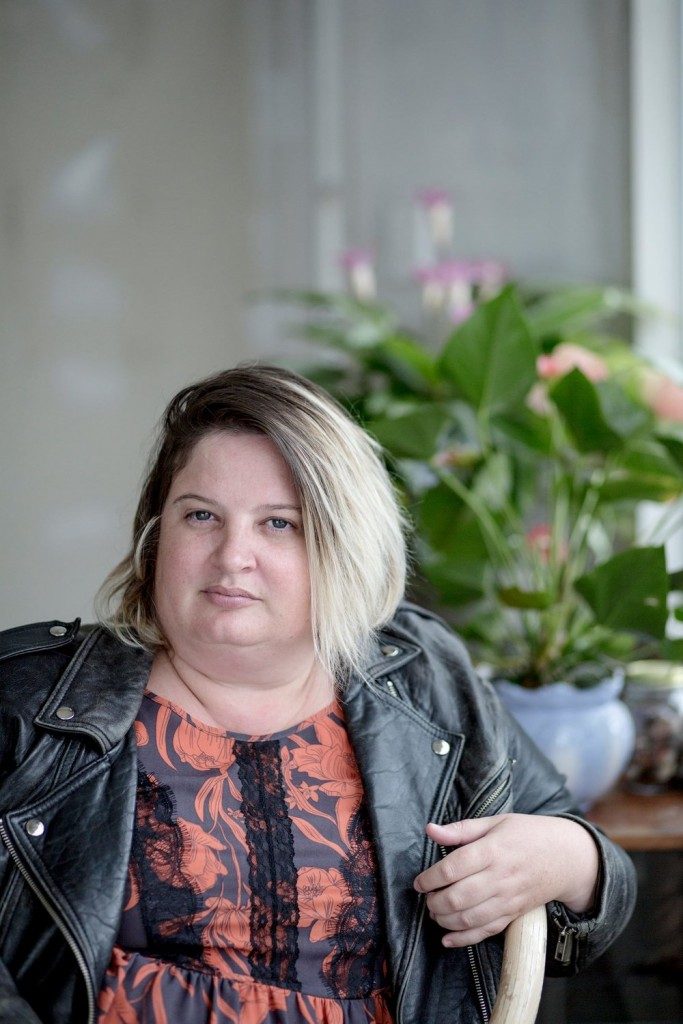 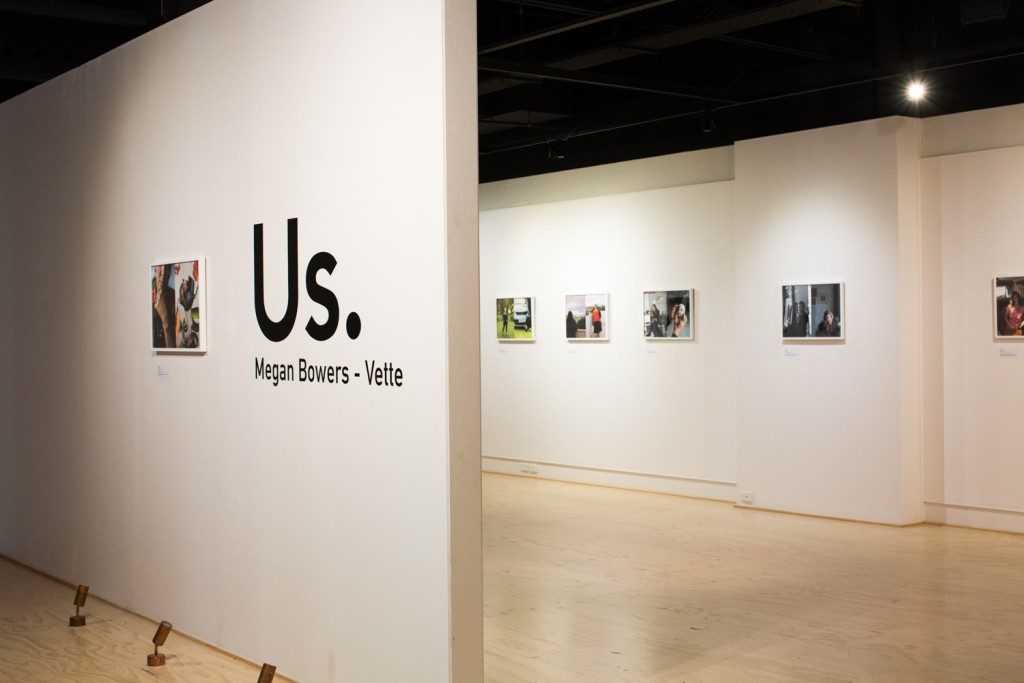 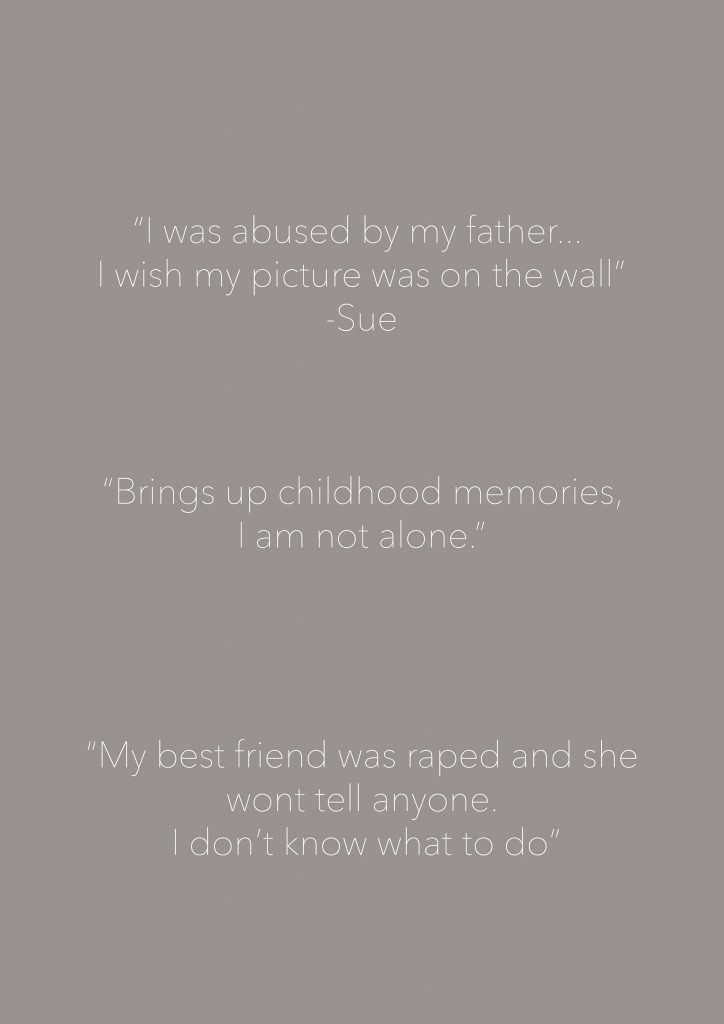 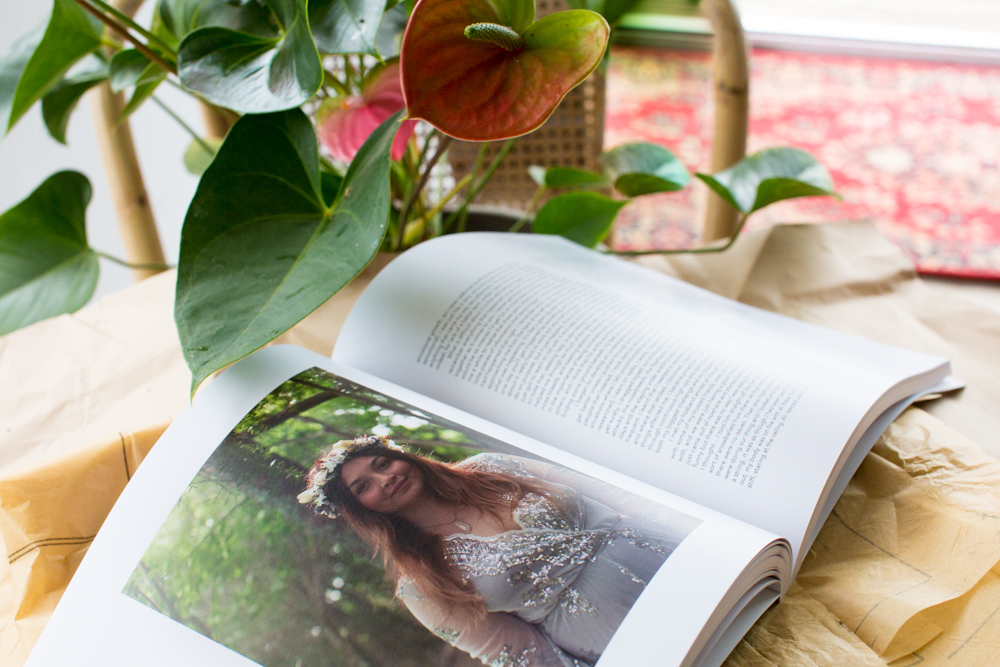 Us exhibition publication
« Back to all exhibitions

The Us project is a photographic portrait exhibition of men and women from New Zealand and Australia who have experienced sexual violation. When Megan Bowers-Vette started this project she decided that for those who participated, there would be no anonymity. Show your face, say your name, be proud of who you are, speak your truth. Anonymity sends a signal that there is still something to be ashamed about. It is normal and understandable to feel guilt and shame about what has happened, but Megan wanted to connect with people who had worked through those feelings and were ready to show up and stand in their truth.
The conversations within the project aim to foster a much deeper understanding of many different aspects of the spectrum of sexual violation, how it affects people’s sense of self worth, their mental health and their relationships with others. How our justice and mental health systems help and hurt survivors. Survivors deal with a myriad of issues ranging from anxiety, depression and PTSD, to not being able to have healthy relationships with partners, family and even friends. Children of abuse grow with very warped ideas of sex within society, and a very skewed idea of who they are and what they are worth.
The focus of the stories is the validation of the person offended against. Who are they? Business people, colleagues, performers, parents, lovers. People passionate about standing up for what they believe in, fighting for a better world for their children, wanting to share their story to help others who find themselves in the same trap. Their stories are beautiful accounts of love and freedom against the odds, of finding light in the dark, and providing that for others. It is an incredibly moving chronicle of the acts of love performed by these people, putting their own pain aside to create a loving safe community for those who need it the most.
Megan’s personal interest within the project has not been about the offender at all, as she learnt that to many people, identifying the offender is the same old sensationalising we have grown accustomed to through the media’s portrait of assault victims. Once you start to listen to these stories, naming and shaming of offenders hasn’t always brought any healing at all. Survivors are forced o negotiate their way through a far more intricate web of self discovery than a court case can deliver.
The stories in the project are not about wielding pitchforks and exacting revenge against a perpetrator, they are overwhelming stories of love, forgiveness and freedom. To understand this project is to understand the fact that these are stories from real people, with beautiful open hearts and minds. These people don’t want revenge, they want their voices heard.

The exhibition is comprised of 50 framed diptych photographic portraits, each 440h x 615mm. These are hung alongside each other with a reasonably generous spacing in-between. In addition to the labels provided, twenty selected (edited) testimonials from the publication on A2 panels will offer the viewer with more in-depth information on these portraits without the need to refer back to the publication. Several copies of the publication will also be available for perusal which will require a communal table and chairs.

Selected quotes from testimonials on perspex strips can be placed around the exhibition walls as required plus a large specially made hard covered comments book will encourage viewers to share their thoughts about the exhibition. A wall mount for the book will be produced and travel with the show.

Note that the artist is keen to be available to attend openings, public programme events, and to carry out media tasks if required.

The exhibition is accompanied by a 270 page full colour publication containing 50 true and brutally honest stories from experiences of sexual violation.
The book will be helpful to many in society who wish to understand the mind of a survivor. From ‘experiencers’ who wish to find validity in how they have reacted to what they have been through, to those who seek to understand their loved ones and offer the right kind of support. The publication gives voice to an experience society doesn’t want to acknowledge, and in doing so validates survivors, letting them know their voice is important. It provides a safe space for truth.

Megan Bowers Vette was raised in Whangarei, Northland. An influential photography and art teacher at high school sparked something of a curiosity in her, so much so she left high school on an early acceptance to Wellington’s Massey University Bachelor of Photographic Design.
After spending some time abroad, Megan returned to Whangarei, where she met her husband, and decided to complete Northtec’s Bachelor of Applied Art. Here she met New Zealand art photographer Ellie Smith, who became a long time mentor.
Since returning to New Zealand, Megan became involved in the local Northland art culture, having several solo exhibitions, as well as experimenting in sculptural photographic forms. This resulted in entering a solid resin and photographic breastplate into Wellington’s World of Wearable Art Awards. “Betty Botanica” ended up spending three years at the Nelson WOW museum, as well as featuring in the “Bizarre Bra” best of publication.
After the birth of her son, Megan worked as an events and projects manager for the Old Library Arts Centre, and during that time set up The Shutter Room, a community photographic studio, gallery and gathering space that still goes strong today, and has a membership of over 100.
In 2014 Megan attended the scholarship program at Auckland’s Kingsize Studios, and began taking on commercial photography roles in Auckland.

Megan started the Us project in 2016, starting with a Youtube video in which she shared a little of her own journey with sexual abuse, and called for others to take part in the project. Not knowing what the response would be, she was overwhelmed when she received over 200 replies to her video. Through her process, participants were whittled down to the number she had originally set for herself, exactly 50.
A large number of the participants were blocked or discouraged from taking part in the project from family or loved ones, and the stories of people threatening to disown the participants started flooding in. Others became embroiled in court battles and realised they wouldn’t be allowed to participate due to restrictions with mandatory name suppression. For some it just became too dangerous to take part because their perpetrator had violent tendencies.
Megan spent two years flying around New Zealand and Australia, interviewing participants and correlating the information into a 270 page book. As time went on it almost became a scientific study of sexual abuse and human reaction. This was funded partially by Megan herself, as well as some help from crowdfunding and creative communities. The Us project held its inaugural exhibition at Whangarei Art Museum.

Us has been made possible with support from Creative Communities and Epson New Zealand. Special thanks also to Whangarei Art Museum